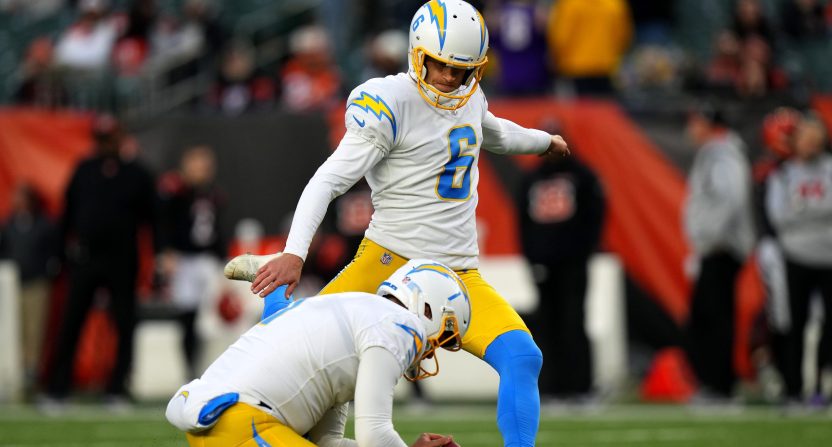 NFL fans spent much of the night in pain watching a game that featured two struggling offenses, tons of penalties and questionable playcalling.

Both of these teams on #MNF. pic.twitter.com/0ov3K2o6gy

In the end, Hopkins soldiered on, kicking four field goals, including the game-winning, 39-yard kick in overtime, to send the Chargers to a 19-16 victory over the Denver Broncos.

Dustin Hopkins — on an injured hamstring — for the Chargers win over the Broncos!

The Chargers never led until the walk-off field goal with 2:38 left in OT. #MNF 🏈 pic.twitter.com/5XBwb054hH

Hopkins hurt his hamstring kicking an extra point early in the second quarter.

“That first extra point I felt a pop,” Hopkins said.

But he kept playing, making field goals of 37, 31 and 35 yards before booting the game winner in OT.

It’s somehow appropriate that a kicker with a bad leg won a bad game. Fans on Twitter spent much of the night second-guessing calls. Not unusual for any game, but this game was definitely not pretty. There were 19 penalties, with the Broncos committing 10 for 151 yards, the most penalty yardage by a team since TruMediaSports started tracking the stat in 2000.

The Denver Broncos are up to 151 penalty yards on Monday Night Football vs. the Chargers.

That's the most since it was tracked by @TruMediaSports since 2000. pic.twitter.com/8cxo1huPgL

These are two of the worst coaches in the NFL. Period. It really is that bad. Which is why you take the under and the points. Chargers OC literally handcuffs his QB every single week. Broncos offense is an abomination. Crimes against modern footballing being committed every week

Broncos are incredibly hard to watch. Especially for a team that so many expected to be instant playoff contenders.

Not sure how many more games they have in prime time but may be time to flex them out. Another brutal 60+ minutes.

The ugliness continued into overtime. Neither team seemed comfortable doing more than running the ball. The Chargers were set up for the game-winning kick when the Broncos botched a punt return.

Dustin Hopkins when it's fourth down: pic.twitter.com/t9NVMp2oI3