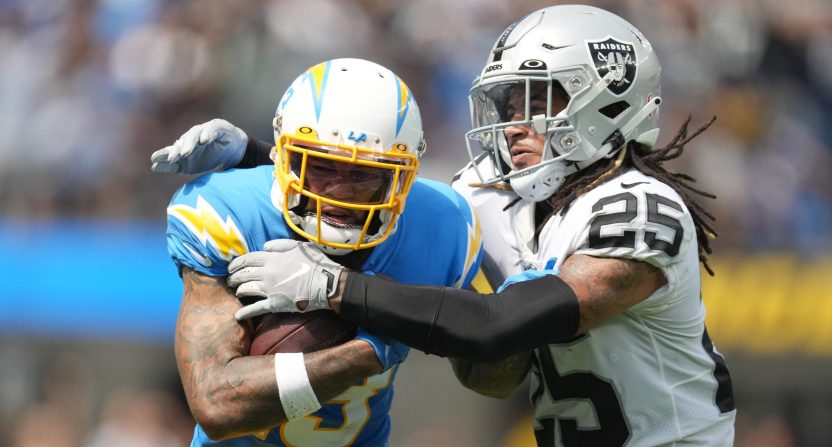 There was a lot of talk this NFL offseason about the AFC West’s vast improvements, with all four teams making huge additions.

Week 1 featured a rematch of two AFC foes that played for a playoff spot at the end of last year, the Las Vegas Raiders and the Los Angeles Chargers, and the Chargers were able to get some revenge with a 24-19 victory in thanks to an impressive performance from star quarterback Justin Herbert.

Herbert was able to thrive despite an early injury to top receiver Keenan Allen, and it looks like he will need to do so again in Week 2 on Thursday Night Football in a pivotal matchup against the Kansas City Chiefs.

The Chargers have officially ruled out Allen for Thursday’s game due to the hamstring injury that he suffered against the Raiders.

Allen has been the model of consistency over his ten-year NFL career, making a Pro Bowl appearance in each of the last five seasons for the organization. His absence in Thursday’s game could loom very large in a matchup against arguably the best quarterback in all of football, Patrick Mahomes. Many Chargers fans now feel very uneasy about Thursday’s game.

Updated with #Chargers game status designations. Keenan Allen being out is a big deal. Allows #Chiefs DC Steve Spagnuolo to put a lot of focus on Mike Williams. Pressure is on LA's second-year WR Joshua Palmer to perform. https://t.co/AF2lllHQRC

No Keenan Allen tomorrow vs the Chiefs. That’s big https://t.co/X3RBjvsJih

Allen being out is huge. Jackson even if he can play a little bit is a huge boost for them. https://t.co/r2l80gQYfl

The Arizona Cardinals had no answer for Mahomes and the Chiefs offense in their Week 1 matchup, allowing five passing touchdowns in a 44-21 defeat.

It will undoubtedly be interesting to see if the newly improved Chargers defense with six-time Pro Bowl linebacker Khalil Mack can fair any better on Thursday night.