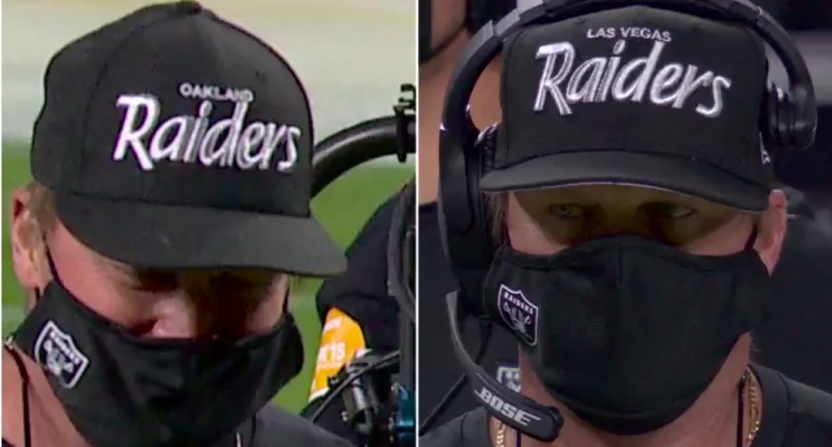 Despite doing their best to blow it on several occasions, the Los Angeles Chargers took down the Las Vegas Raiders 30-27 on Thursday Night Football.

Where to start with this one… hmm… how about with Las Vegas head coach Jon Gruden wearing an *Oakland* Raiders hat to begin the game? The Raiders told Fox reporter Erin Andrews that they were “kinda shocked” that they didn’t notice Gruden wearing the wrong hat.

Erin Andrews says the Las Vegas Raiders are "kinda shocked" that they didn't notice Jon Gruden had on an *Oakland* Raiders hat to begin the game. pic.twitter.com/H6pOmS96CZ

But as for the actual football action, the Raiders lost quarterback Derek Carr to a groin injury late in the first quarter, leading to Marcus Mariota playing what turned into a full four quarters with overtime. Mariota played well considering the circumstances, completing 17-of-28 passes for 226 yards, one touchdown, and one interception (he was also very effective on the ground, with nine carries for 88 yards and one touchdown).

But the interception was horribly timed; Mariota was picked off by veteran cornerback Chris Harris while the Raiders were at the Chargers’ 21-yard line in a tied game with just over two minutes remaining in regulation. Harris returned it to the Raiders’ 31-yard line.

This game is such Thursday Night Football. pic.twitter.com/1BoFlaO0ey

That set up Chargers kicker Michael Badgley for a go-ahead 51-yard field goal, and Badgley missed with 51 seconds left in regulation.

And the Chargers proceed to miss the 51-yard field goal. This game… 😂😂😂 pic.twitter.com/5mf2diSE0w

That comes after Badgley had missed a 46-yard field goal attempt on the previous Los Angeles drive with 3:38 remaining.

And regulation ended on the Raiders lining up what would be an NFL record 65-yard field goal, only to fumble the snap. A great example of how the quality of football looked from both sides in the final minutes of regulation.

In overtime, the Chargers had a great chance for another interception, but flat-out dropped the Mariota pass. The Raiders later turned the drive into a goal-line series, but had to settle for a field goal to take a 27-24 lead.

Both teams actively trying to give this game away. pic.twitter.com/BMGglSHyBr

On the ensuing drive, Justin Herbert connected with Jalen Guyton for a 53-yard bomb to get the Chargers to the two-yard line.

Justin Herbert and the Chargers hit the bomb! 💣🏈 pic.twitter.com/scTM4PZSbX

And still, the Chargers came oh so close to blowing it. On 2nd-and-goal at the one-yard line, Herbert fumbled into the end zone, but the Raiders couldn’t recover it.

Crazy rules moment here: Herbert fumbles but isn’t the player who recovers it, so the fumble becomes the #Chargers ball at the 1 yard line. Only the person who fumbles can advance the ball. #LVvsLAC pic.twitter.com/0bposZBgRC

By rule, the ball was placed back where the fumble occurred, and Herbert (barely) got into the end zone on the next try.

He's correct, and the Chargers beat the Raiders in OT. pic.twitter.com/kzR6aQZXNQ

While there was plenty of hilarity in this one, Herbert was truly great, as has been the case in most of his rookie campaign. The Oregon product completed 22-of-32 passes for 314 yards (9.8 AVG), two touchdowns, and no interceptions, with a 121.1 passer rating. He threw ropes from all over the field.

Justin Herbert's second TD of the first half!

Herbert has now tied the record for most passing TDs in a rookie season. #BoltUp

Herbert is the real deal, and *a lot* of NFL organizations would gladly trade place with the 5-9 Chargers right now. They still have a long way to go to compete with the juggernaut Kansas City Chiefs for AFC West crowns, but the Chargers have a special talent at the most important position in sports and shouldn’t be far away from contention.

This is a killer loss for the Raiders. Las Vegas’ playoff chances drop from 15% to 2% with the loss, according to Five Thirty Eight. The AFC playoff race is absolutely loaded, placing the 7-7 Raiders ninth, 1.5 games behind the seventh-place Miami Dolphins for a playoff spot. 9-7 is unlikely to get into the playoffs, and going 2-0 vs the Dolphins (in Vegas) and Denver Broncos (in Denver) will be tough enough for this team right now to begin with- especially if Carr is still out.

After starting 6-3, and being seconds away from beating the Chiefs *twice*, it’s been an ugly collapse for the Raiders (heck, their only win in the last five weeks came on a Hail Mary vs the winless New York Jets).