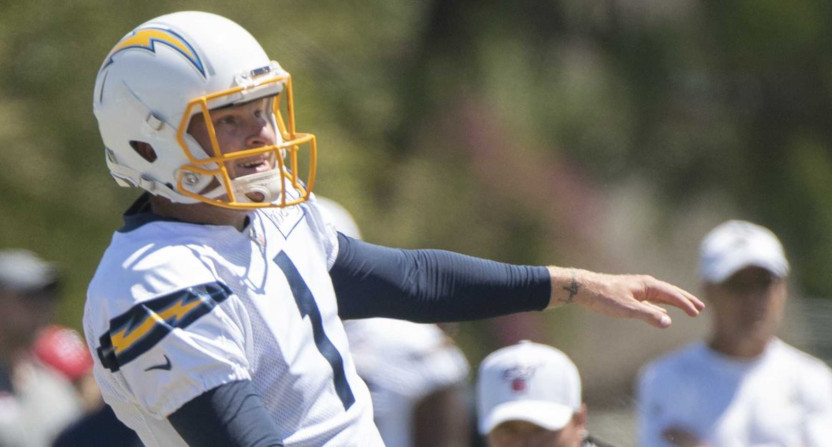 After Los Angeles Chargers’ kicker Michael Badgley suffered a groin injury during their season opener last week, punter Ty Long stepped in and hit three extra points and a field goal in the team’s 30-24 overtime win over the Indianapolis Colts, earning a selection as the AFC Special Teams Player of the Week. With Badgley still recovering, the Chargers opted to use Long on kicking duty again in Sunday’s road clash against the Detroit Lions. This time, it didn’t go as well.

After making an extra point in the first quarter and a 39-yard field goal in the second quarter, Long missed back-to-back field goals in the third quarter (from 39 and 41 yards, respectively), and that had plenty of people upset. Including Chargers’ quarterback Philip Rivers:

Philip Rivers melting down on the Chargers sideline as his kicker (who is the punter but is kicking because the actual kicker is hurt) keeps missing field goal attempts. pic.twitter.com/Y8E9IwfvOr

Of course, that wasn’t the only time Rivers was upset Sunday:

And it wasn’t the only time he’s been mad about the team’s long-standing kicking issues:

It took a terrible kicker for Philip Rivers to finally start looking like the dad of eight pic.twitter.com/Ts5E5ybXgZ

Or about other things:

There was some logic to the Chargers electing to use Long rather than sign someone else as a kicker. For one thing, Badgley was only listed as questionable this week and was only ruled out late Saturday night. And beyond his showing last week, Long has a solid kicking background; he specialized in kicking rather than punting in college at Alabama-Birmingham. Plus, his first NFL chances after that (training camp with Washington in 2015 and an offseason stint with Pittsburgh in 2016) came as a kicker. He then served as both a kicker and a punter for the CFL’s B.C. Lions in 2017 and 2018, and was named a league all-star both seasons, averaging 88.2 percent accuracy on field goals.

So there was some reason to think Long could handle this. And hey, he only missed two kicks overall, better than the three Caleb Sturgis missed for the Chargers last November against the Seahawks. But Long’s two missed field goals proved costly Sunday; that left San Diego behind 13-10 late in the fourth quarter, rather than tied or ahead. However, in the end, it wasn’t Long who wasted their last chance, but Rivers; he was picked off in the end zone by Darius Slay.

Badgley is expected to return next week, which should help the Chargers’ kicking game. The interceptions, however, will need a different fix.