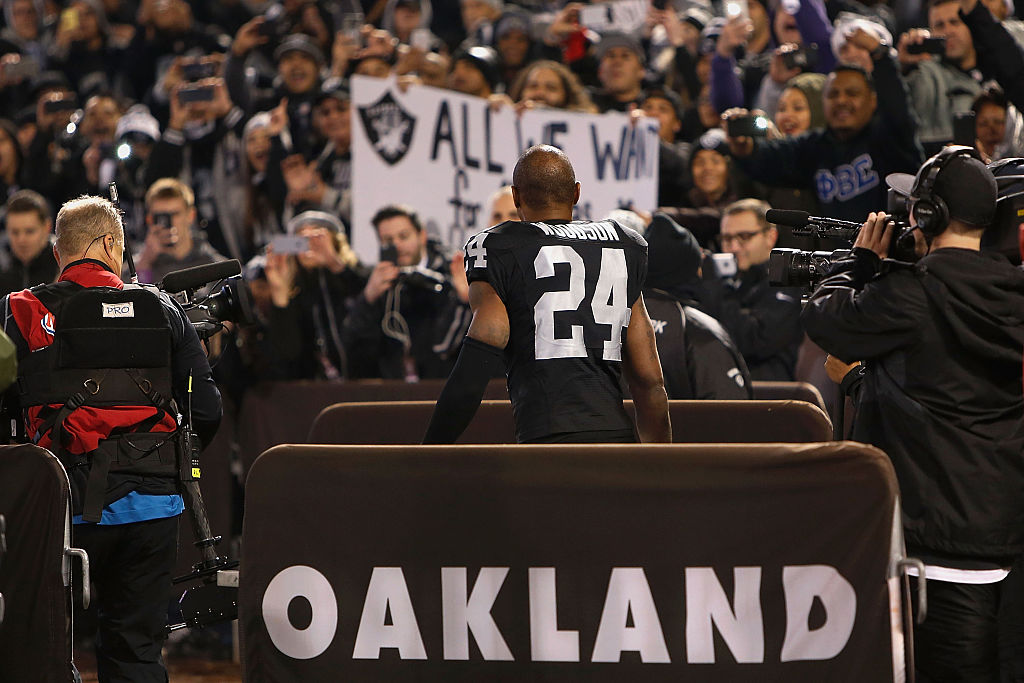 Charles Woodson played his last NFL home game Thursday night, and the Raiders made sure he went out in style.

After the team pulled off a 23-20 overtime win over the Chargers, the nine-time Pro Bowler received a Gatorade bath from teammates, then delivered an emotional speech to fans.

Woodson, 39, is finishing up his 18th NFL season, having announced his retirement on Monday in time to say goodbye to Raiders fans. He spent his first eight years in Oakland, left to play seven seasons in Green Bay and then returned to the Raiders in 2013.

After inciting a booming “Rai-ders, Rai-ders” chant, Woodson delivered the following post-game message to the crowd:

Listen man, it’s been a joy for me to come back and play here for a second time around. You guys welcomed be back with open arms, as if I never left. I just want you to know how much that means to me, to my family, my two boys. I just want you to know that you guys are under great leadership. This team is going to get so much better, really really soon. Though this is last game in the Coliseum, just know that I would never leave. Go Raiders!

"Just know that I will never leave you. Go Raiders." ~ @CwoodsonF#RaiderNationhttps://t.co/fRdAiaOGoq

Woodson retires as one of the best defensive backs in NFL history. He was 1999 Defensive Rookie of the Year, 2009 Defensive Player of the Year and a three-time All-Pro. He currently ranks fifth all-time in interceptions (65) and second in interception-return touchdowns (11).

Woodson seems like a good guy, and everyone in the NFL has positive things to say about him, so it’s nice to see things end well for him. The Raiders won and Woodson got some offensive snaps, which was cool, even though he lost three yards on a failed reverse.

He also may have stumbled upon the proper way to conduct a farewell tour: announce your retirement late enough to avoid the season-long fuss but early enough to get a send-off from his home fans.

In the locker room after the game, coach Jack Del Rio awarded the game ball to Woodson, who delivered another speech, mostly on the promising future of a long-dormant Raiders franchise.

"What a special evening."

Charles Woodson gets the game ball and sends a message…

Woodson’s final regular-season game will come a week from Sunday in Kansas City. On Tuesday he was named to the Pro Bowl, which takes place Jan. 31.