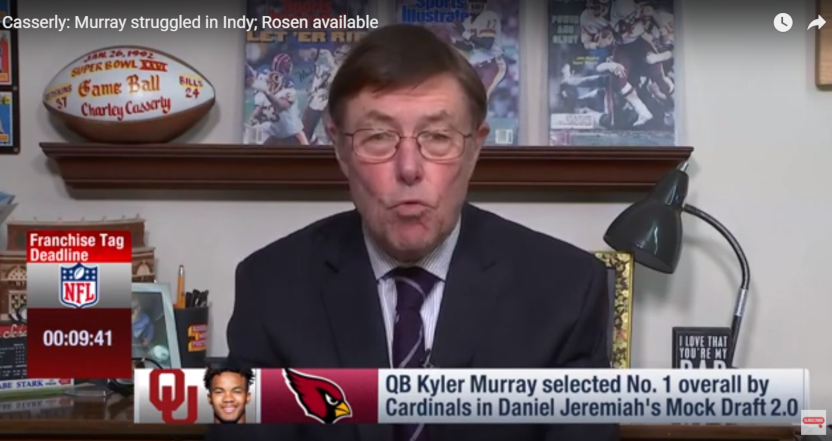 There’s always a risk when it comes to media relaying sports figures‘ anonymous comments, and that’s maybe even more notable when it comes to the NFL draft. There’s so much attention on that draft and so many media looking to stand out with their draft coverage that it’s seemingly quite easy for “team sources” to get any comments out there they want, and that raises questions about if those comments are trying to be self-serving (for example, there’s the idea of a scout bashing a player his team secretly wants to make it more likely they’ll be able to pick them up lower in the draft). With anonymous comments in particular, too, there usually aren’t any consequences for the executives uttering them; they can say whatever they want about a prospect and as no one outside of the reporter they spoke to (and possibly an editor or two) knows it came from them, it’s not going to backfire on them. That always leads to some remarkable trashing of prospects, with the commentary on Kyler Murray from NFL Network’s Charley Casserly the latest example there.

But this time around, there’s been some interesting pushback. And some of the most notable comes from Pro Football Talk’s Mike Florio:

Casserly would be entitled to his opinions about Murray if they were indeed his own opinions. But Casserly peddled on the NFL-owned and NFL-operated broadcast network earlier today not his own opinions but opinions that were shared with him by someone who supposedly witnessed (or who heard about) Murray’s performances during Scouting Combine interviews.

Murray reportedly sat for 10 interviews at the Scouting Combine. How many of those teams did Casserly talk to in crafting his report? The quotes being distributed by NFL Network indicate that Casserly talked to “more than two teams, I’ll leave it at that.” But he shouldn’t leave it at that; he should provide the specific number of teams. It could be as few as three or as many as all of them, and that’s a critically important piece of information.

…Remember when NFL Network had to remind Warren Sapp that he isn’t a reporter, after he outed Jeremy Shockey as the Saints’ bounty snitch? What Casserly did today is the same thing. Instead of chastising Casserly, however, the NFL is reveling in his reporting.

But who vetted Casserly’s report? Who are his sources for this report? Did NFL Network require Casserly to name them before allowing him to spread such strongly negative information about a player around whom NFL Network surely will be focusing much of its pre-draft hype?

Of course, PFT often uses its own anonymous sources. But Florio argues later in his piece that anonymously-sourced facts are different than anonymously-source opinions on prospects. “While anonymously-sourced fact (e.g., Casserly’s report that the Cardinals were shopping Josh Rosen at the Combine, something else that technically doesn’t fall under Casserly’s analyst umbrella) makes the football and non-football reporting world go ’round, anonymous opinion, especially prior to the draft, has become the fuel for those who would manipulate members of the media to push a narrative and/or to advance an agenda.” And he has a point there.

With the draft, there are clear and obvious goals for team executives. One is to have the player they actually want still available at their draft spot, and a second is to mislead opponents about who they actually want, which can lead to other teams trading up (and trading later-round or future picks to do so) in order to grab a player that the first team wasn’t going to take anyway. It’s far from certain that leaking information to the media actually has an effect on any of this (it’s not proven that NFL teams care at all about what these anonymously-sourced reports say), but there’s a perceived potential effect.

If a player like Murray has reportedly been weak in interviews and board work, that may lead to less discussion of a team taking him extremely high. And that may make it easier for teams with high draft picks to rationalize passing on him (or trading down in an attempt to get him later). And even if we presume that teams don’t care directly what other teams’ executives say anonymously to media, there’s at the least an indirect effect; teams do care about how their own fans perceive their draft, and if the prevailing narrative fans are hearing is “Kyler Murray’s a bum!”, that could lead to less high-up teams really looking at him. Of course, maybe the executives that talked to Casserly were being completely honest and do really think Murray is terrible, but there’s no way to know from the outside.

It might be nice to eliminate anonymous combine comments altogether, but it’s not going to happen. So, for now, it’s important to consider each report of these kinds of comments on its merits, on somewhat of a “The frogurt is also cursed” scale. As Casserly notes, he’s been a NFL analyst for a long time: that’s good! But as Florio notes, Casserly is predominately used as an analyst, not a reporter; that’s bad when it comes to him reporting things. Casserly mentioned he got this from “more than two” teams; that’s good! But we don’t know how many more than two, and that’s bad. (It’s presumably three, as “more than X” sources is usually “X+1” sources.) Casserly does mention specific things related to Murray and his actual combine performance, especially when it comes to board work, and that’s good (it at least elevates this above counterfactual takes like “Dwayne Haskins is more of a runner than a thrower“), but there still are some debatable intangibles here (like “leadership and study habits,” which might mean very different things to different evaluators.) Thus, all in all, this is far from great, and these comments probably shouldn’t have been aired on a prominent media outlet.

And really, that becomes the key takeaway here. As mentioned, there are generally no repercussions for anonymous executives’ comments; it’s not like when you have owners or general managers criticizing players on the record, as at least they can be criticized themselves for their takes. But granting anonymity to a source and publishing that source’s comments shifts the burden of credibility to the reporter and the outlet, and that’s going to be the case here.

If Murray winds up actually being passed on by a ton of teams and struggling in the NFL, and if it turns out weak showings in combine interviews and board work played a role there, then perhaps there was merit to these remarks, and the credibility of Casserly and NFLN will rise as a result. But if he winds up being a NFL star, and especially if the team that drafts him says he impressed in interviews and board work, then these  comments look ridiculous in retrospect, and wind up as a blow to the credibility of both the reporter and the outlet. And that’s something that NFL media should be very cognizant of in the lead-up to the draft. Want to report an executive’s anonymous comments? Fine. But consider if they’re telling the truth or if they have other motivations, and consider how that report will make you and your outlet look if it winds up being disproved.