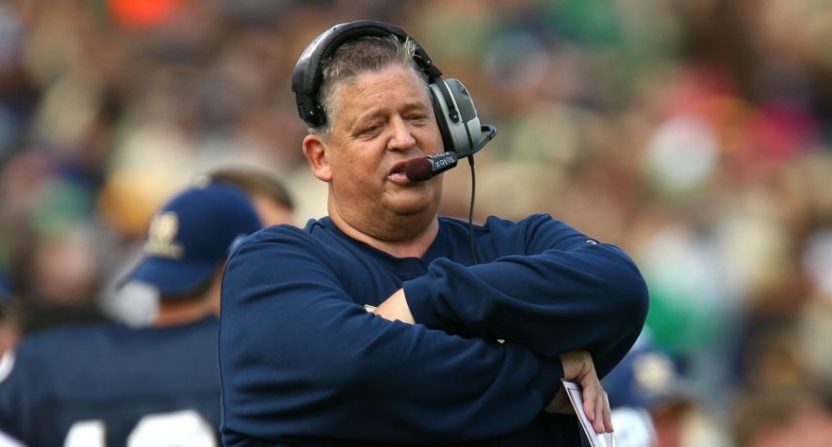 When the Tampa Bay Buccaneers take on the New England Patriots in Foxborough this Sunday, it will be the first time that Tom Brady playing in Gillette Stadium since leaving the franchise he won six Super Bowls with. Naturally, the storylines are forming and discussions around why Brady wanted to leave are at a fever pitch. While Bill Belichick might want to avoid the conversation, plenty of people who have been involved with the Patriots over the years are being asked what they think happened to drive Touchdown Tom out of town.

Charlie Weis, who was New England’s offensive coordinator between 2000 and 2004, before leaving to become head coach at Notre Dame, worked closely with both Brady and Belichick. And when he spoke with NBC Boston’s Tom Curran, he had a very simple answer as to why he thinks Brady decided to leave New England behind. The offensive talent available to him in Tampa.

“I’m just saying that Tommy looked around and he found himself a place — we can talk about how the different personalities of the head coaches and how they do things all we want — but really at the end of the day is, it’s the guys he’s playing with,” said Weis. “Because the coaching staff, no matter where he went, they would have kind of figured it out eventually. Eventually, they would have come to a meeting of the minds, that would happen no matter where he went. Okay, but very few teams that he was going to go to, had a stable of guys like that to be dealing with.

“I think Tom just went to a better situation offensively,” Weis said. “I mean, he’s playing with better players. No disrespect. That’s no disrespect to the guys in New England. But look at the talent that he’s got around him. If I asked you right now, who’s the number one receiver, could you give me one?”

While New England’s offensive options aren’t too shabby, it’s hard to argue that Brady ended up with a much better situation with the Bucs. Not only did he have Mike Evans and Chris Godwin to throw to but he ended up getting Rob Gronkowski to join him there. Ronald Jones was also a very solid running back to compliment the passing offense.

You have to imagine there was a little more to it than just Brady looking at the two rosters and making a major life decision like that, but it does make sense that it would be part of the equation.

Weis added that he also thinks Bill Belichick knows what he’s doing and that losing Brady might have caused short-term problems, but the longtime coach has some kind of plan for the future.

“Not only does (Belichick) have the greatest insight of any coach I’ve ever been around, but he has the greatest foresight I’ve ever been around,” said Weis. “So you could bet that, as they were struggling last year, he already had this game plan in mind that the day that season was over — coach the hell out of them until the season’s over — and then move on to the next year and be ready to go. And that’s one of the reasons why they are where they are right now.”