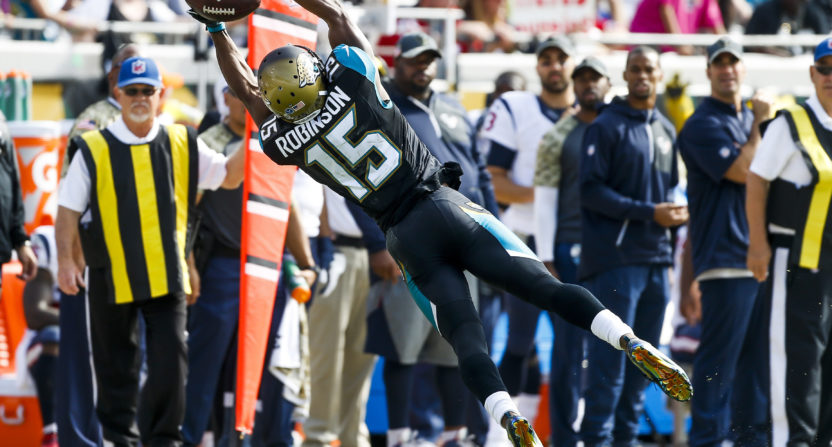 It looks like I won’t be sleeping tonight/this morning as the NFL free agency news keeps breaking.

Shortly after it was reported that the Denver Broncos are signing Case Keenum, ESPN’s Adam Schefter and NFL Network’s Ian Rapoport tweeted that the Chicago Bears will sign wide receiver Allen Robinson when free agency begins on Wednesday.

The #Bears are expected to sign former #Jaguars WR Allen Robinson, sources say. A big-time pass-catcher off the market.

If you’re looking for a more reliable source, well, Robinson himself apparently told ESPN’s Josina Anderson that he’s signing with the Bears, and he even provided the contract details: three years, $42 million. NFL.Com’s Ian Rapoport adds that the contract includes $25 million in guaranteed money.

WR Allen Robinson just told me he intends to sign a “3-year, $42M dollar deal with the #Bears.” #TeamNoSleep https://t.co/G6oNqZDdKq

Kendall Wright — a fine NFL WR, but a No. 3-4 on a competitive team —  led the team in receptions with 59, and he had one touchdown. The next-highest reception total for a Bears wide receiver was 24, from Josh Bellamy, a No. 5-6 wide receiver (again, on a competitive team)/special teams ace. 5’6″ rookie running back Tarik Cohen was second on the team in receptions with 53. The touchdown catch leader was rookie tight end Adam Shaheen with three, and he only had 12 receptions on the season (though that was partly due to a very dumb coaching staff). Wright led the team in receiving yards with 614, and nobody else even had 400+! Sure, the quarterback play didn’t really help here, but it would’ve been difficult for Aaron Rodgers or Tom Brady to do too much with this group.

It should go without saying that Bears needed a complete overhaul at the receiver position before entering quarterback Mitch Trubisky’s sophomore NFL season.

The return of Cameron Meredith from a torn ACL would help (Chicago signed him to an original round restricted free agent tender on Monday, allowing them to match any offer if he receives from another team), but he’s also had just one good NFL season and was undrafted out of Illinois State in 2015. He did look legitimately good for the Bears in 2016 (66 receptions, 888 yards, 4 touchdowns), but is probably the second or third-best receiving option on a title contender, and again, the Bears need basically an *entire* new receiving corps.

There’s also the draft, and the Bears select eighth overall, but there don’t appear to be any prospects worthy of that pick, especially after Alabama’s Calvin Ridley scored poorly at the Combine (like, dead last for wide receivers according to the SPARQ metrics). Additionally, drafted wide receivers usually aren’t immediate big-time producers. In 2017, only the Steelers’ JuJu Smith-Schuster and the Rams’ Cooper Kupp ranked top-40 in receiving yards for rookie wide receivers.

So, the Bears desperately needed to look to the free agent market and identify the best player, and do whatever possible to sign that player, even if it meant a clear overpay (they have the cap space). And the best wide receiver on the market is Allen Robinson.

But Robinson has claimed to be feeling good for nearly two months (he tore the ACL in September).

A-Rob said yesterday that no concerns come March and start of free agency. He'll be able to pass a physical. #jaguars

Allen Robinson on being ready for 2018 after his injury: "Every team across the league knows what i've done in this league and what i'm capable of so that's not really an issue." @Thee_AR15 #NFLFreeAgency pic.twitter.com/mfJ5pwUKTu

And frankly, the Bears had to take the chance on Robinson with his track record and upside. Sammy Watkins is also available, but he’s had injuries of his own — limited to eight games in 2016 — and had just 38 receptions in 15 games for the Rams in 2017. Marqise Lee and Paul Richardson are out there, but these guys are No. 2-3 receivers and are older than Robinson.

Robinson is still only 24 years old (turns 25 in August), and that’s crazy to think about when you consider what he’s already done in the NFL.

Allen Robinson intends to sign with the Bears, according to @AdamSchefter.

Robinson had been one of the most productive receivers in the NFL entering the 2017 season. pic.twitter.com/XQlNXPoV9i

In 2015, Robinson put together a ridiculous season with 80 receptions for 1,400 yards (6th in the NFL) and 14 touchdowns (tied for 1st in the NFL). Pro Football Focus has Robinson getting more “deep receiving yards” in that 2015 season than any NFL wide receiver since 2006.

Allen Robinson was dominant on deep balls in 2015! pic.twitter.com/fFH2WxzLjb

Robinson followed that up with a “down” 2016 season in which he had 73 receptions for 883 yards and six touchdowns. Keep in mind he was doing this all with Blake Bortles as his quarterback (Bortles had a 78.8 passer rating in 2016, for example).

Robinson’s size — 6’3″, 211 — and big-play ability made him a talent that Bears general manager Ryan Pace had to do whatever possible to acquire. While the Bears needed wide receivers of any kind, ideally they would find a big-bodied one with a large catch radius (in case Trubisky’s accuracy issues continue), one with good separation skills and hands, and one with big-play ability to take the top off of a defense (a threat that would also help Jordan Howard and the run game). Robinson is the rare talent that gives them all of these skills.

The Bears still need a slot wide receiver, and they’ve been said to be very interested in former Chiefs wide receiver Albert Wilson with new Chicago head coach Matt Nagy being Wilson’s offensive coordinator the last two seasons (the Dolphins are reportedly the frontrunner for Wilson, though). And they should still draft an upside wide receiver by Round 4 or so, but they now don’t need to feel damn near obligated to draft one by Round 2.

But this is an excellent, and necessary start to the offseason as the Bears try to surround Trubisky with weapons. Provided the Bears match any offer on Meredith, Trubisky now has two talented 6’3″ receivers to work with, and one of them has been the NFL’s best big-play receivers over the last few years. Trubisky will also have a head coach and offensive coordinator in Nagy that should do a much better job than John Fox’s staff did of maximizing the skills of young talents like Cohen and Shaheen on offense. And again, with ample cap space and the draft, the Bears probably aren’t done upgrading the pass-catching weapons (Update: They went on to add Taylor Gabriel and Trey Burton on Tuesday), and they’re likely to make upgrades on the offensive line (Quenton Nelson makes a ton of sense if he falls to No. 8).

There’s a long, long way to go, and it takes a lot to go right, but it’s not hard to see how Trubisky and the Bears could make an Eagles/Wentz, Rams/Goff-like leap in 2018.