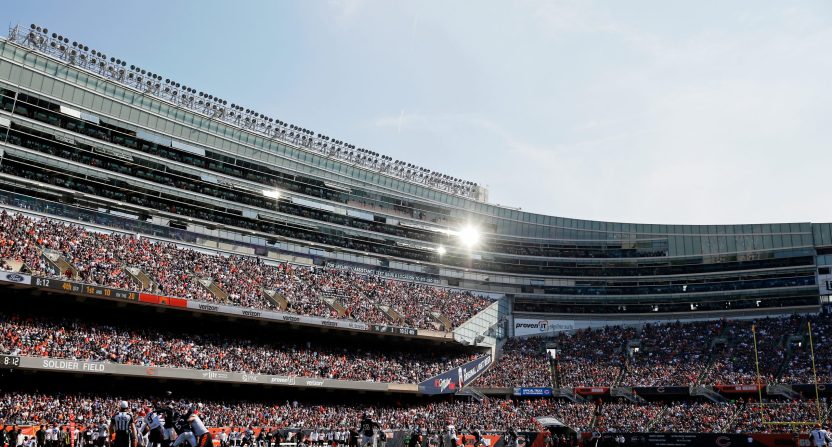 The playing conditions at Soldier Field, the NFL home of the Chicago Bears, have been heavily criticized recently, with the NFL world blasting the field turf during the preseason and the Bears’ own kicker admitting he practices in poorly-kept parks to simulate the horrid conditions. Well, Soldier Field just gave fans another reason to criticize.

While a brand-new Bermuda grass playing surface was installed ahead of the regular season, Soldier Field had a new problem on Sunday. Ahead of Chicago’s season-opening showdown with the San Francisco 49ers, a photo surfaced showing a rather crooked sideline paint job – not exactly what fans and teams have come to expect from an NFL playing field.

The sideline at Soldier Field 😬 pic.twitter.com/7ygbyKYzE1

Naturally, the NFL world had plenty to say about the embarrassing paint job, blasting bumpy line on Twitter on Sunday afternoon.

In high school, I had a summer job working the baseball field crew at the Granite City park district. Our lines were almost this bad. https://t.co/xglZGZQ15u

The sideline is more of a suggestion in Chicago https://t.co/6ot2vxuueF

Bears fans deserve so much better than what that franchise has become. Gonna be a loooong season. Maybe they'll be half decent by the time they move to Arlington https://t.co/itOnICJljO

me giving myself a french manicure circa 2005 https://t.co/O02NDESItF

It’s worth noting that the imperfect sideline is likely due to inclement weather in Chicago ahead of Sunday afternoon’s game. Heavy rain on Sunday morning made for some very wet field conditions at Soldier Field, including plenty of standing water on the turf. This appears to have washed away the original paint job, forcing a last-minute sideline to be drawn.

Still, it’s not a great look for an NFL football game.