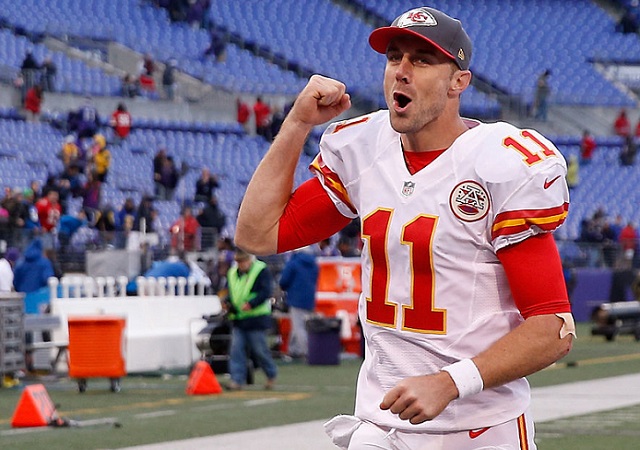 With only two weeks left in the season and time running out for those teams who aren’t in the playoffs to figure out a way to squeeze in, take a look at the AFC quarterbacks and see which teams currently have a top-notch quarterback on which they can count to lead them to a potential Super Bowl. Elite quarterbacks, so to speak.

Let’s see, New England’s Tom Brady and Pittsburgh’s Ben Roethlisberger are two guys that have successfully made it to the top on multiple occasions. And…

Cincinnati’s Andy Dalton is injured and might not be ready for the playoffs. That leaves the untested A.J. McCarron.

Indianapolis’ Andrew Luck is injured and probably won’t play this week. That leaves the very much tested (and very much beat up) Matt Hasselbeck and the entirely unproven Charlie Whitehurst.

Houston’s Brian Hoyer is coming off a concussion and isn’t a top 10 kind of quarterback anyway. And don’t even ask about his backup, Brandon Weeden, who’s won just five of his 24 career starts.

But there are two others in the AFC who have been resurrected this year, leading their respective teams to the brink of the playoffs, and for NFL teams at this point in the season, that kind of dependability at the quarterback spot is a saving grace.

Three years ago, hardly anybody would have looked at Alex Smith and Ryan Fitzpatrick and thought they could play some of the best football of any quarterback in the league. Yet, here they are, with the Chiefs and Jets, respectively, forcing us to reconsider who we thought they were in the past and where they might go in the future.

In 2012, Smith was an afterthought at Super Bowl media day. He had led the 49ers to a 6-2-1 record, completing a career-high 70.1 percent of his passes for 13 touchdowns, five interceptions and a quarterback rating of 104.1. The year before, San Francisco, under his quarterbacking leadership, had gone 13-3.

But Smith suffered a concussion in Week 10, and then-coach Jim Harbaugh was all too happy to turn over the team’s offense to Colin Kaepernick. Even though, under Harbaugh, he was playing the best football of his career, it didn’t matter: Smith was done in San Francisco.

Fitzpatrick, meanwhile, had never found the success of Smith. The first time he got significant playing time, taking over for the injured Carson Palmer in Cincinnati in 2008, he was sub-par, and through four years in Buffalo and one season apiece in Tennessee and Houston, Fitzpatrick was simply a mediocre quarterback.

But this year, after supposed Jets franchise quarterback Geno Smith was punched out in the locker room by IK Enemkpali, Fitzpatrick ascended to the starting role and at the age of 33, he’s having his best season ever, leading the Jets to a 9-5 record. Though New York only has an outside shot at getting one of the AFC wild card spots, the fact the Jets have managed at least nine wins for the first time since 2010 is, in part, a testament to Fitzpatrick’s performance.

So, how did this happen for Smith and Fitzpatrick? How did they put themselves into the positions where they are some of the most trusted quarterbacks in the AFC? How did they get their teams to count on them?

For Fitzpatrick — who has thrown for 3,428 yards, 26 touchdowns and 12 interceptions — he credits his reunion with Chan Gailey, his former head coach in Buffalo who’s now the Jets offensive coordinator, and his own penchant for building chemistry with his offensive teammates by communicating with them non-stop.

“It’s really hard to do what Ryan is doing and how he’s leading us,” receiver Brandon Marshall told NJ.com’s Darryl Slater. “You have a bunch of different guys that you’ve never really thrown to, and you’re thrown in it in the middle of camp and you’ve got to build this chemistry. If it wasn’t for him, no telling where we would be right now.”

For Smith — who most likely will set a career record for yards thrown (he’s at 3,205 entering this week) to go with 16 touchdowns and just four interceptions, leading Kansas City to eight straight victories — it was about finding a coach in Andy Reid who had confidence in him and could play to his strengths.

“He is playing at a very high level,” Browns coach Mike Pettine said during his weekly press conference on Wednesday. “I think Andy Reid does an outstanding job matching what he has talent wise to the scheme. He takes advantage of what his guys do. … If [a quarterback] is capable of doing it and you surround him with the right people and the right scheme, then that is how you judge it …

“You also have to make sure that you are allowing him to do things that he can do that he can excel at it. If a guy is not a pocket passer, don’t let him be one. If he is not a sprint out guy, don’t put him on the move. When a guy is comfortable in what he is doing and he is confident in it, then you can see it. [Smith] is a good example.”

But perhaps more than anything else, people forget sometimes that quarterbacks can improve as they age. Smith and Fitzpatrick have gotten smarter as they’ve gotten older. They’ve seen more, they’ve gained experience. They realize that quarterbacks don’t need the most talent to find success.

Sometimes, being a game manager is an insulting term in today’s NFL. But Smith and Fitzpatrick have game-managed their teams to the brink of the playoffs. They’re not elite quarterbacks. But they’ve figured out a winning formula, and that is why their teams can count on them. They’re not Brady or Roethlisberger. They’re Smith and Fitzpatrick, and for the Chiefs and the Jets, that’s been good enough.