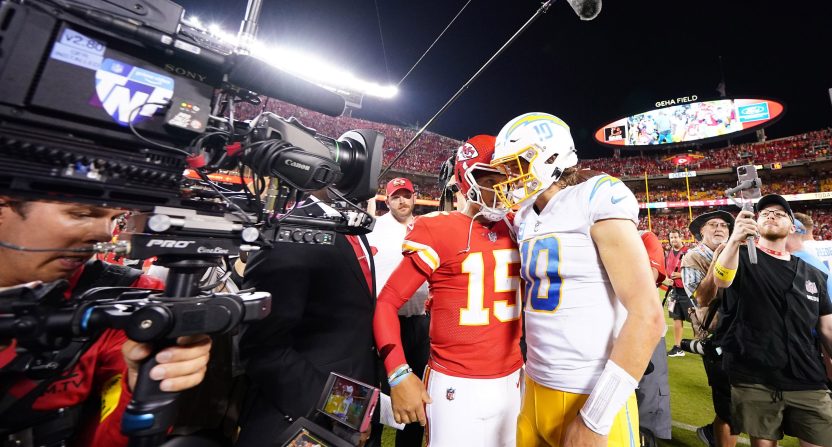 The game-changing play came during a 17-17 tie in the fourth quarter when Kansas City seventh-round rookie Jaylen Watson intercepted a Justin Herbert pass on first-and-goal and took it all the way back for a 99-yard pick-six.

Jaylen Watson — a seventh-round rookie — with a 99-YARD PICK-SIX on a Justin Herbert pass for the Chiefs TD! 🏈🔥 pic.twitter.com/IWU2FPJOKy

Later, with Kansas City up 27-17, it appeared that Herbert may be done for the game after taking a big hit to the ribs.

Herbert left the game for one play (replaced by Chase Daniel) but returned and played through injury (the Chargers provided an update on Herbert’s injury status after the game). It was clearly bothering Herbert and prevented him from running for an easy first down one play, but then he followed it up with an incredible dime on fourth down.

Justin Herbert — in clear pain — goes from being able to hardly move on one play to throwing an incredible dime on the next. Amazing. 🏈 pic.twitter.com/EDq9AnIyY1

And later on the drive, Herbert threw a touchdown pass to Joshua Palmer to make it a one-score game.

Justin Herbert later threw a touchdown on the drive. pic.twitter.com/cqooAuBFR6

Against most teams and quarterbacks, Herbert — who completed 33-of-48 passes for 334 yards, three touchdowns, one interception, and a 100.5 passer rating — would’ve come out on the winning end in a very admirable effort.

But, Herbert was facing another superstar quarterback in Patrick Mahomes, who completed 24-of-35 passes for 235 yards, two touchdowns, no interceptions, and a 106.2 passer rating. Mahomes showed off his otherworldly, magical skills on the touchdown passes.

The Chiefs overcame a 10-0 deficit and didn’t score until 11:38 remained in the second quarter.

This is likely one of the many entertaining, competitive battles we’ll see between Mahomes and Herbert in the future. They’ll face each other again on Nov. 20 in Los Angeles, and maybe they’ll meet in the AFC playoffs as well. And they could be a battle all season long for the AFC West title.

But, for the Chargers to contend for the AFC West title, Herbert will need to be healthy. He’s getting x-rays on Thursday night.

Justin Herbert just left the locker room and walked into the X-Ray room. He had his left arm tight against his side. He got drilled in the ribs and missed a play but did return to the game. More to come.

Here’s a look at how the NFL world is reacting to the Chiefs’ win and the main storylines from Thursday Night Football:

The Chiefs are now 22-3 with Patrick Mahomes as their starter in AFC West.

No QB has guided his team to more wins in his first 25 divisional games since the NFL merger in 1970.

The Chiefs don’t care who you added to your roster in the off-season. THEY STILL OWN THE DIVISION. It’s funny that the one concern people had was the Chiefs’ defense and they end up making the play that wins them the game.

The Chargers blitzed Mahomes on 13 of 36 dropbacks (36%) after blitzing him at a 25%-or-lower rate in both matchups last season.

what are we even doing here

Three years ago, Jaylen Watson was working at a Wendy's while he was trying to find somewhere to continue playing football.

Tonight, he has a 99-yard INT of Justin Herbert in his 2nd career NFL game.

Perseverance would be an understatement.