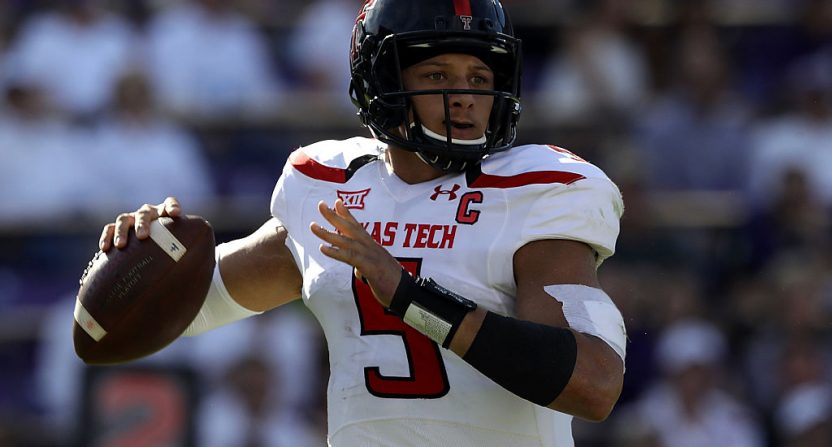 The Kansas City Chiefs have been known for their conservative offense under coach Andy Reid and quarterback Alex Smith. So watching them trade two first round picks and a third rounder to get former Texas Tech gunslinger Patrick Mahomes as their quarterback of the future in Thursday night’s NFL Draft came as something of a shock.

The Chiefs entered Thursday with the No. 27 selection in the first round. They traded that pick along with along with next year’s first round selection to the Bills for the No. 10 pick.

Many people didn’t see Mahomes as a first rounder. The 21-year-old was a two-year starter at Texas Tech and put up some ridiculous numbers last season as a junior. He led the nation with 5,052 passing yards and 53 total touchdowns (41 passing, 12 rushing). But despite the big numbers, Texas Tech went just 5-7 without a single victory over a Top 25 team.

Mahomes finished his college career with a 13-16 record and an 0-10 mark against ranked teams.

But man, the dude’s got a gun.

Based on that raw talent, Mahomes saw his draft stock rise, and apparently it rose just enough for him to sneak into the top 10.

Here’s what some scouts said of Mahomes to the Milwaukee Journal Sentinel’s Bob McGinn prior to the draft, including one who specifically said he did not belong in the top 10:

“I may be crazy but when I watch his tape, just as a scout, I get excited,” one personnel man said. “He’s a guilty pleasure. We all have biases. Going in, Texas Tech, dink, dunk, dink, dunk, this guy cannot translate. I left saying, ‘Love this guy. He’s so much fun.’ He pulls plays out of his (expletive) like you wouldn’t believe. It’s not dink and dunk. He believes in his arm so much that it’s a problem sometimes. He’s not ready right now. I’m not comparing him to Aaron (Rodgers), but that natural sense of making plays when they break down is unusual. Now can he make plays from structure? That’s why he’s not a top-10 pick.”

“He has the best arm of the group but he plays crazy,” a third scout said. “I don’t even think ‘gunslinger’ is the right word. He’s reckless. … I remember seeing (Brett) Favre in his bowl game his senior year. In that game he had three or four plays you thought were a little off the wall. Mahomes might have 20 plays in a game where you go, ‘What are you doing?’”

Despite his raw talent, the fact that anyone drafted him (as well as North Carolina’s Mitch Trubisky, who went No. 2 overall to the Bears) over former Clemson star and two-time Heisman finalist Deshaun Watson surprised many people.

But you can tell ESPN’s Mel Kiper and Jon Gruden were excited about the pick.

Gruden and Kiper love that Mahomes pick so much they fist bumped pic.twitter.com/j1IaFPWVsD

Barring an injury to Smith, Mahomes won’t start as a rookie. He may not even start in 2018 as Smith has two years left on his deal. Now Smith can mentor Mahomes for a year or two while the rookie refines his game. However, having Smith — famous for his checkdowns –mentor Mahomes — who for all we know has never thrown a checkdown in his life — seems like an odd fit.

Although Smith has been very solid in his four years with the Chiefs, he’s about to turn 33 years old. So this was the time for Kansas City to begin planning for the future, and that’s exactly what they did by drafting a quarterback in the first round for the first time since 1983.

The last quarterback drafted in the first round by an Andy Reid team was Donovan McNabb. And that one turned out pretty well.

The Chiefs are paying a big price by giving up next year’s first round pick, but there’s a chance they struck gold if they can develop Mahomes as they hope.