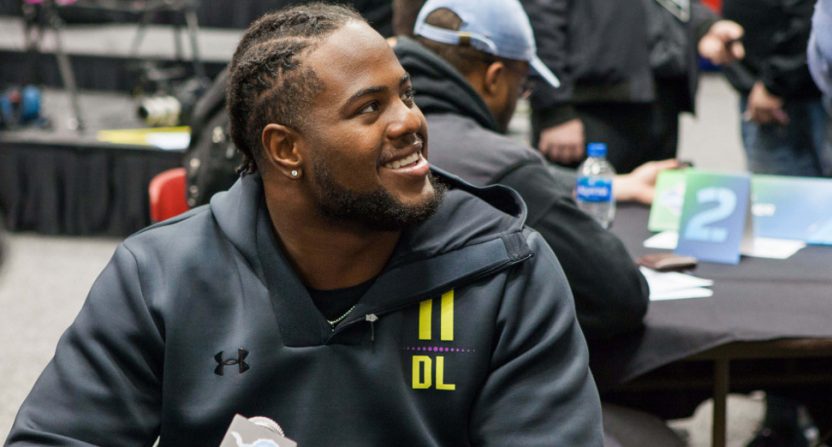 The Oakland Raiders and Kansas City Chiefs’ franchises have been battling in the same division since both franchises were established in the inaugural season of the old American Football League in 1960, and their rivalry has survived a Chiefs’ relocation (they were originally the Dallas Texans), two Raiders’ relocations, and much more. But Raiders’ GM Reggie McKenzie may feel a little conflicted about the rivalry now, as the Chiefs traded up to draft McKenzie’s son Kahlil (a defensive lineman out of Tennessee, who they say they plan to move to guard) in the sixth round. And the Raiders’ Twitter account immediately noted the awkwardness:

Well, this is awkward…

Beyond that, Kahlil (seen above at this year’s NFL combine) already started the trash talk with his father, as per Adam Teicher of ESPN.com:

He did note that both his father and his uncle (Reggie’s twin brother Raleigh, now a Raiders’ scout) had been trying to talk him into switching to offensive line, though; Raleigh played guard for 16 seasons in the NFL. So they’re probably happy about that, but not the team where he landed. And Reggie McKenzie said that while he’s somewhat okay with it, Raiders’ legend Charles Woodson felt a little differently in a text:

“He told me, ‘Your son has to retire. There’s no way he’s going to put that red helmet on his head.’ Part of me felt that way,” Reggie said. “But in all seriousness, it’s a good opportunity for him, and I was hoping he would land in a spot that would kind of grow him to that position.”

We’ll see how things work out for Kahlil in Kansas City. But if he does make the team and wind up lining up against the team his father runs regularly, that’s going to add yet another dimension to that rivalry.