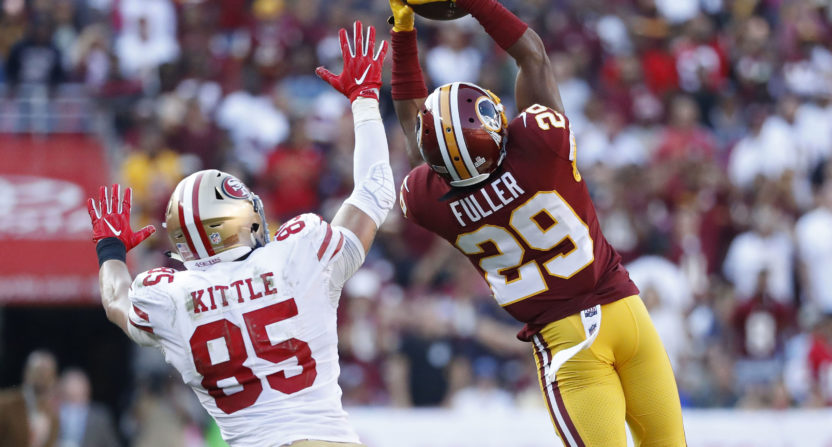 The Washington Redskins decided Tuesday that Alex Smith will be their franchise quarterback going forward.

Washington gave cornerback Kendall Fuller and a third-round pick to Kansas City, and passed up the opportunity to re-sign quarterback Kirk Cousins. They have conviction in Smith — at the most important position in sports — being the guy to take their team to a championship level. You may not (and you may not even think he’s better than Cousins, or at least not enough to give up these assets), but they do. And if they’re right, they won’t care what they gave up to acquire him or the contract they gave him (a 4-year, $94 million extension, with $71 million in guarantees).

The reality is we won’t be able to fairly assess this trade for Washington until we see how they perform with Smith as their quarterback.

The one thing we can say right now is on the other side of the trade: the Kansas City Chiefs made an outstanding deal.

The writing was on the wall last April that Smith wouldn’t be with the Chiefs much longer, when Kansas City chose to trade up to the 10th pick in the 2017 draft and select Texas Tech quarterback Patrick Mahomes. Despite Smith putting together the best statistical season of his career and having the NFL’s top passer rating, the Chiefs didn’t even wait until after the Super Bowl to move on from him. Barring a Super Bowl run of their own, there was likely little chance Smith would return as their quarterback, and especially after Mahomes showed off his high-ceiling talent in a Week 17 start at Denver.

So, the Chiefs likely made the decision to trade Smith months ago, and then it became a matter of maximizing their return this offseason. They certainly did that.

ESPN’s Adam Schefter originally said the Chiefs’ return in the deal was a “third-round pick and an unidentified player,” which already sounded like a very good return for Smith. The assumption was that the unidentified player would basically be a throw-in, but Kendall Fuller is no throw-in.

Fuller was a third-round pick by Washington in 2016, and went on to have an outstanding 2017 season which included four interceptions. Pro Football Focus graded Fuller as the second-best slot corner in all of the NFL this season.

Fuller even allowed the lowest passer rating of any targeted slot corner in the NFL.

When Kendall Fuller lined up in the slot, he allowed a passer rating of 55.0. That was the best for all slot cornerbacks last year. Steven Nelson and Phillip Gaines both allowed passer ratings above 100 when in the slot.

Reporters that cover Washington refused to believe Fuller could be in the deal.

There is zero chance Kendall Fuller is the player-to-be-named in the Alex Smith trade. Teammates raved about him. Coaches raved about him. DeAngelo Hall told me in December that Fuller could start on the outside next year. Deep breath, people.

If Kendall Fuller is involved in this trade it’s a bad trade. Period.

Even *Fuller* refused to believe it, and for good reason. He’s a rising star at a premium position and is still just 22 years old. He’s already shown he can excel as a slot corner, but the 5’11”, 198-pounder has the ability to make the move to the outside if the Chiefs would prefer that. If he were a free agent right now, he would get a big-time contract. Instead, the Chiefs get him for two seasons on a rookie deal, and at a position of need for the team.

But the Chiefs also got a third-round pick in the trade, with the pick set to come in at No. 78 overall. This is particularly important after the Chiefs dealt away their 2018 first-rounder to Buffalo in the Mahomes trade. They may still lack a first-round pick, but now have three picks in the top-86 and could potentially move up if they’d like. And even if they stay put, the Chiefs have had plenty of success finding offensive stars in the mid-to-late rounds with Andy Reid as head coach (Travis Kelce 3rd round in 2013, Kareem Hunt 3rd round in 2017, Tyreek Hill 5th round in 2016, etc). Perhaps they can find another weapon for Mahomes.

And the Chiefs save $17 million in cap space by trading Smith. Kansas City was approximately $10 million over the cap before the trade, so this is significant for the organization’s financial flexibility heading into the offseason. Additionally, bringing in Fuller likely means the Chiefs will cut Darrelle Revis (which was probably a good idea anyway if you saw the playoff game), which would free up $4.5 million more in cap space. Between the draft pick and cap relief, Kansas City general manager Brett Veach will have the opportunity to add pieces to help Mahomes, or upgrade the defense (that’s already started with the Fuller addition).

For Washington, this trade will all come down to how Smith performs over the next five seasons. But for the Chiefs, we can confidently say right now that they struck gold. This deal opens up so many opportunities for Kansas City, while also making it clear to Patrick Mahomes that this is his team and the front office is working hard to surround him with talent.

The Chiefs’ season ended in extremely disappointing fashion, but their fans have to like how the offseason has started and the direction the organization is headed in.