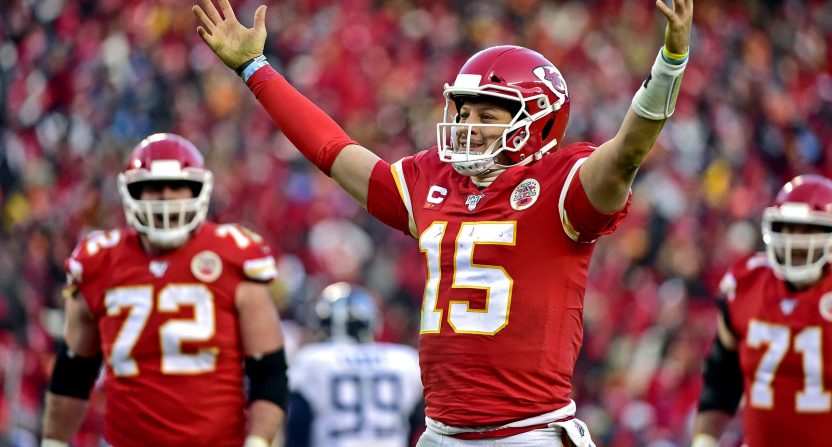 The defending champion Kansas City Chiefs have signed the NFL’s most valuable player to a record-breaking contract through the 2031 season.

ESPN’s Adam Schefter reports that the Chiefs have signed Patrick Mahomes to a 10-year contract extension worth $450 million. Schefter adds that the “injury guarantee” is $140 million.

The injury guarantee is $140 million, per source.

The contract does not contain language that ties its value to a percentage of the salary cap.

Update: According to NFL Network’s Ian Rapoport, the contract is actually worth $503 million and features $477 million “in guaranteed mechanisms.”

Mahomes already had two years remaining on his deal with Kansas City, so he’s under team control for 12 more years (taking him into his age-36 season).

Patrick Mahomes had two years remaining on his contract, and he and the Chiefs are adding on 10 more, making it a a new 12-year contract in total.

The 24-year-old has put up otherworldly numbers in his first three seasons in the NFL (he only played one game as a rookie, so really it’s been two seasons). In 2018, Mahomes put together a 113.8 passer rating and threw for an NFL-best 50 touchdown passes (vs 12 interceptions), en route to the NFL MVP award. He followed that up with winning the Super Bowl MVP in the 2019 NFL season.

And, it hasn’t just been the numbers- Mahomes has showed off ridiculous arm talent to go with solid accuracy (with throws from all angles), mobility, and the ability to turn blown-up plays into big plays. His pure talent level from the position is unlike any quarterback we’ve ever seen.

So, doing everything to try to keep Mahomes under contract for a long, long time, was a no-brainer for the Chiefs. They’ve made that happen, and it’s very bad news for the AFC West — and the AFC in general — for the next decade-plus.

While it takes *a lot* to go right for Patriots-esque dynasties to happen, having the league’s best quarterback under control for this long certainly helps those chances. The Chiefs already have one title with Mahomes, and they’re the favorites to win the Super Bowl in the 2020 season as well.

Update: Mahomes tweeted a video that concluded with, “We’re Chasing A Dynasty.”