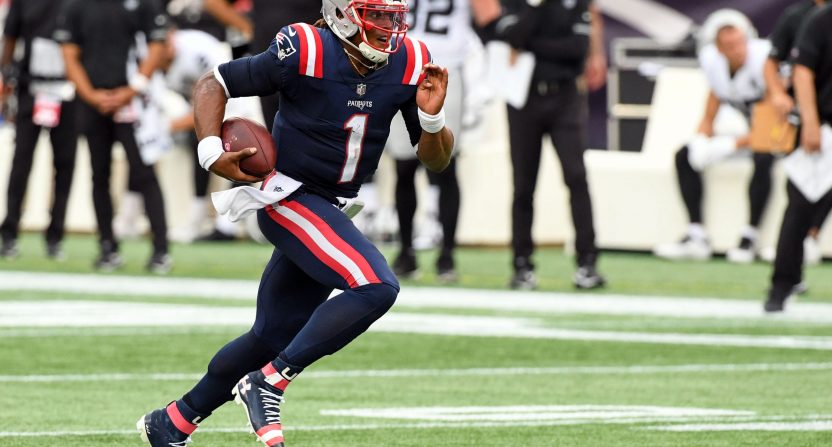 The most anticipated NFL game on Sunday had to be the defending Super Bowl champion Kansas City Chiefs hosting the mighty New England Patriots. A quarterback showdown between the rejuvenated Cam Newton and MVP Patrick Mahomes.

Instead, the game has postponed following the news that Newton and Chiefs practice squad QB Jordan Ta’amu have both tested positive for COVID-19.

“The New England-Kansas City game scheduled for 4:25 p.m. ET Sunday will be rescheduled to Monday or Tuesday after positive COVID-19 tests on both teams,” per a league statement. “In consultation with infectious disease experts, both clubs are working closely with the NFL and the NFLPA to evaluate multiple close contacts, perform additional testing, and monitor developments. All decisions will be made with the health and safety of players, team, and gameday personnel as our primary consideration.”

Patriots’ QB Cam Newton tested positive and is out for Sunday’s game vs. Kansas City, per @FieldYates and me.

The Patriots released a statement Saturday morning regarding Newton (without naming him), saying that he entered self-quarantine and “several additional players, coaches, and staff who had been in close contact with the player received point of care tests this morning and all were negative for COVID-19.”

Had the game been played as scheduled, Newton obviously would have not been involved. He also won’t be available for the rescheduled game, if that happens on Monday or Tuesday. In his place,  Brian Hoyer or 2019 fourth-round draft choice Jarrett Stidham will likely get the start for the Pats.

Meanwhile, NFL Network’s Ian Rapoport and Mike Garafalo then reported that Chiefs practice squad QB Jordan Ta’amu had also tested positive and was moved to the reserve list. Ironically, Ta’amu had played the role of Newton in practice this week.

It’s not just New England: #Chiefs practice squad QB Jordan Ta'amu has tested positive for COVID-19 and is being added to the reserve list, per me and @MikeGarafolo.

While there haven’t been any further positives on either side, it’s important to note that it can take days for positive COVID tests to manifest, as we’ve been seeing with the Tennessee Titans all week. While the NFL certainly hopes to play the game by Tuesday, it wouldn’t be shocking to find out there are more positives on the horizon that push the game back even further.

#Patriots players were alerted this morning to come in and get POC tests because a player had tested positive. That player is Cam Newton. The immediate results were no more positives. As we’ve seen in Tennessee, results often take days to manifest.

Newton has been having a great resurgence in his first season with New England. As the replacement for Tom Brady, he’s more than held his own, going 62-of-91 for 714 yards, with two touchdown passes and four rushing touchdowns. No word yet on how long the team will be without him but any games the team had to play without Newton will be that much more difficult.