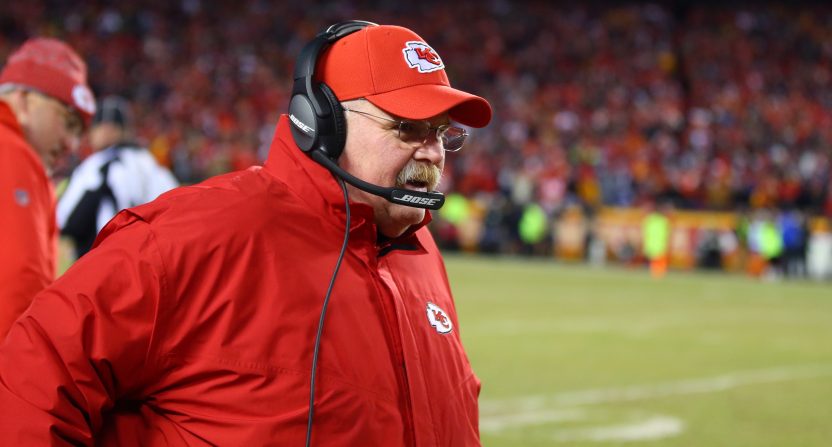 For years, the NFL overtime system has been that the first team to score wins the game. After it was perceived that the team who won the coin toss could just kick a field goal and win, the NFL tweaked the system, and if the team who got the ball first kicked a field goal, the other team would get one possession to either match the field goal or score a touchdown to win.

The overtime period was eventually cut from 15 minutes to ten, and that’s where we are today. Even when it was introduced, there was be a realistic possibility that a team could still win the game on the first possession of overtime. But despite that risk, it wasn’t much of a concern until the Patriots won Super Bowl LI and last season’s AFC Championship Game in overtime after possessing the ball first with their opponents not getting a chance of their own.

Now, it seems like the Chiefs will be trying to get the OT system changed so both teams get a chance at possessing the ball, no matter what their opponent does on the first drive. Speaking to Pro Football Talk, Chiefs GM Brett Veach revealed that head coach Andy Reid is looking to propose a system that will give both teams a chance to score in overtime.

“Coach is working on that,” Veach said. “I think everybody wants a chance for guys to do what they do. I don’t really see the downside of having that. Especially when you have a player like Pat Mahomes. It would have been a lot of fun. I think people, if they weren’t already tuned in for a great game, would have turned on that overtime.”

Many will chalk this up to sour grapes from Kansas City, given they fell victim to this scenario in January, but maybe the current OT system does need to be changed.

If the NFL isn’t enthused with a system like what Reid is proposing, there are some other suggestions. Fans love the NCAA’s idea of starting at the 25 and giving both teams a chance to score, going back and forth until there’s a winner after each OT period.

A new concept that has received mainstream attention is the AAF’s OT system. Inspired by high school and CFL play, a team starts at the 10 and has four downs to score a touchdown. A team cannot kick a field goal, and in the AAF, they must go for two if a touchdown is scored. If tied after one possession each, the game ends in a tie in the regular season. If tied in the playoffs, they would have another OT period. We haven’t seen it in action yet, because the AAF hasn’t had a game go to overtime in their first three weeks.

If the NFL doesn’t want to admit somebody else has a better OT system than them, just stage a 10 minute overtime period and whatever happens, happens. At least this way, both teams have a chance at possessing the ball. And if a team is somehow able to keep the ball for all (or a significant majority) of the 10 minutes and kick a field goal, they kinda deserve to win.

Ideally, the NCAA system seems like the best idea, but don’t hold your breath about that happening. Considering 24 teams need to vote to approve any change in the OT system, the current one is likely staying.