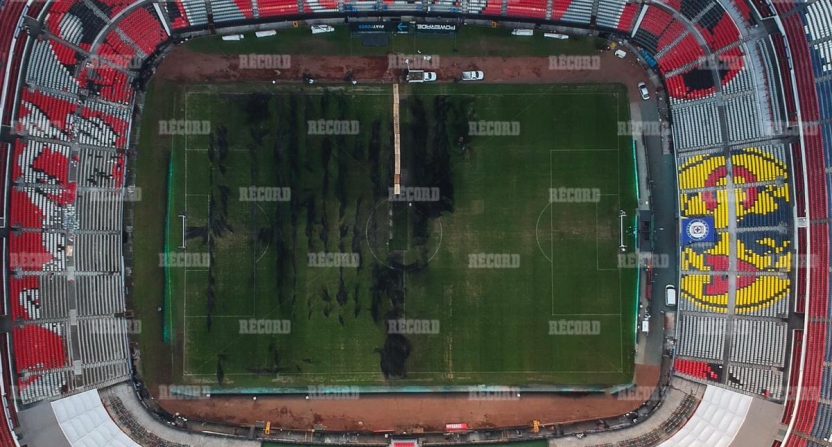 Next week’s hotly-anticipated Monday Night Football matchup between the Kansas City Chiefs and Los Angeles Rams (both 9-1) will be coming to viewers live from the L.A. Coliseum, instead of the initially-planned venue of the Estadio Azteca in Mexico City. There had been speculation about a potential move during the last week, especially after a Shakira concert Wednesday created plenty of burn marks on a field already damaged by heavy soccer use, and the decision to move the game to Los Angeles was officially made Tuesday. Here’s more from NFL.com:

“The decision is based on the determination — in consultation with the NFLPA and following a meeting and field inspection this afternoon by NFL and club field experts as well as local and independent outside experts — that the playing field at Estadio Azteca does not meet NFL standards for playability and consistency and will not meet those standards by next Monday,” the league wrote in a statement.

…”We have worked extensively with our partners at Estadio Azteca for months in preparation for this game,” NFL Executive Vice President of International Mark Waller said in a statement. “Until very recently, we had no major concerns. But, the combination of a difficult rainy season and a heavy multi-event calendar of events at the stadium, have resulted in significant damage to the field that presents unnecessary risks to player safety and makes it unsuitable to host an NFL game. As a result, we have determined that moving the game is the right decision, and one that we needed to announce now in order to allow our teams and fans to make alternate arrangements.”

Here are some photos from the Mexican daily Record sports newspaper on what the field looked like last week:

This is going to create a whole lot of problems for a whole lot of people. First, there’s the potential competitive impact from turning what was theoretically a neutral-site game (in high altitude at that) with high stakes into a Rams’ home game. Beyond that, yes, it sounds like there will be some reimbursement for U.S.-based fans who had planned to attend the game in Mexico, but it seems unlikely that’s going to cover travel and accommodation costs as well, and it may not be easy to cancel or change those arrangements in less than a week. (To say nothing of any time off already booked.)

ESPN will be changing some travel arrangements around as well. It doesn’t sound like they were planning to bring Sunday NFL Countdown to Mexico the way they did two years ago ahead of a Monday Night Football game, but there were still plenty of ESPN people associated with MNF who will now be heading to Los Angeles instead of Mexico City. Oh, and despite now playing at home, the Rams are still practicing on the road:

The Rams, who arrived in Colorado Springs on Monday to practice this week and acclimate themselves to Mexico City’s high altitude, plan to stay in Colorado this week and go through their planned practice routine, per NFL Network’s Andrew Siciliano.

For those who still want to go to the game, it sounds like that’s going to be easiest for Rams’ fans who already have season tickets (season ticket holders can buy their current seats online and add up to four additional seats in a presale Wednesday). The team will release general tickets later on Wednesday, and they’ll also be giving thousands of tickets to first responders who have been battling the California wildfires, which is a nice touch.

All in all, it makes sense to relocate this game. League officials, coaches, players and the players’ association have all expressed concerns about the field, and it doesn’t seem possible to fix it in a week. But this relocation is a big deal, and it is going to make things tough for a lot of people. This could also have future impacts on NFL games in Mexico, as ESPN’s Darren Rovell noted that it could possibly let the league opt out of planned games there in 2019, 2020 and 2021. And it’s amazing that a concert that could do this much damage to a field was approved just weeks ahead of a NFL game.

But hey, turnabout is perhaps fair play, as NFL games have previously torn up the surface at London’s Wembley Stadium ahead of Premier League games, including one this year. So they’ve gone from hurting soccer teams’ fields to having their planned field hurt by soccer and Shakira. How unfortunate.