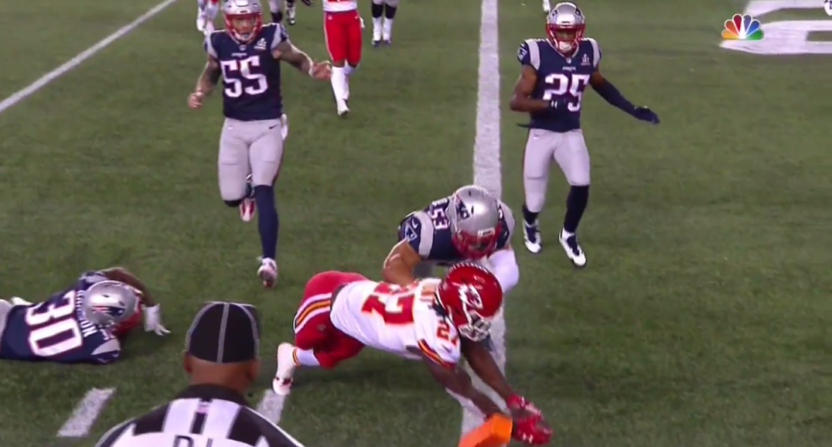 It was supposed to be a special night for the New England Patriots on Thursday, as they raised their fifth Super Bowl banner before the NFL season opener at Gillette Stadium. But the Kansas City Chiefs took a big ol’ dump on that party.

The Chiefs’ offense absolutely annihilated the Patriots’ defense, with a stunning performance to knock off the defending champs 42-27. The Patriots entered the game as 8-point favorites, and favorites to win this season’s Super Bowl as well, but you would’ve had no idea by how this game went down.

Kansas City put up a ridiculous 537 yards on offense, with Alex Smith playing a tremendous game at quarterback (even completing big plays downfield!), and Tyreek Hill and Kareem Hunt making a number of explosive plays. Smith completed 28 of 35 passes for 368 yards, four touchdowns, and no interceptions. Hill had seven receptions for 133 yards and one touchdown, which came on this 75-yard touchdown reception in the third quarter:

And Hunt had 17 carries for 148 yards and a touchdown, along with five receptions for 98 yards and two touchdowns.

It was Hunt’s performance — 246 total yards and three touchdowns — that was the most impressive, given that it was his NFL debut! After a fumble on his very first carry, the former Toledo running back went off, displaying incredible playmaking ability as both a running back and a receiver.

With the Chiefs trailing 27-21 in the fourth quarter, Hunt reeled in this Smith pass for a 78-yard touchdown to give the Chiefs the lead (this basically served as the game-winning touchdown):

The 5’11”, 216-pounder followed up that receiving touchdown with a rushing touchdown later in the fourth quarter:

And the next drive, had this 58-yard carry:

Which set up this Charcandrick West 21-yard touchdown run:

It was an amazing performance by the Chiefs’ offense, but it was every bit as ugly for the Patriots’ defense. As NBC color commentator Cris Collinsworth put it, “It is not a defense right now.”

Things don’t get any easier for the Patriots next week, as they go on the road to play Drew Brees and the New Orleans Saints in the Superdome. To win that game, and to compete for a championship this season, New England will need to see their defense make some considerable strides.

As for the Chiefs, this team looks like they could be an offensive juggernaut, and perhaps many of us (raises hand!) were too quick to call the Oakland Raiders the team to beat in the AFC West.