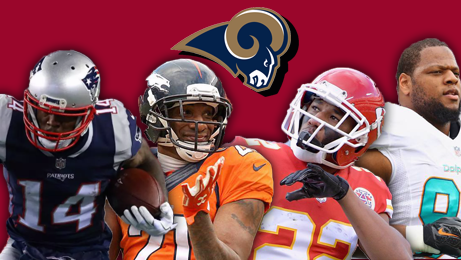 Last season was a great one for the Los Angeles Rams. They won 11 games, finished with the NFL’s top scoring offense, snapped a 12-year playoff draught, and won their division for the first time since 2003.

Due to their team being led by a handful of talented young players including quarterback Jared Goff, running back Todd Gurley, and defensive tackle Aaron Donald, last year’s success seemed like it was just a preview for what is to come in the near future. But after a number of trades and free-agent signings during this most recent NFL offseason, some believe that the Rams have dramatically increased their chances to win a Super Bowl in 2018.

In the past few months, Los Angeles has traded for corners Marcus Peters and Aqib Talib, and they also signed free-agent defensive tackle Ndamukong Suh. These three players have been voted to a combined 12 Pro Bowls and four All-Pro teams during their NFL careers. Adding this trio to a Rams’ defense that ranked 12th in the league in points allowed just a season ago should make them the team to beat in 2018, right?

Well, how about they play some games first?

First things first, Los Angeles should be improved on the defensive side of the ball in 2018 for sure. There doesn’t seem to be much reason to question that thought.

But what about the Rams’ offense? There’s no guarantee that Los Angeles will have the same amount of success putting points up on the board in 2018, especially since their schedule is full of a number of talented defenses.

Last season, Los Angeles averaged 24.4 points per game in their matchups against top-15 scoring defenses and 32.9 points against their other remaining opponents. In 2018, the Rams have eight matchups with teams who had a top-15 scoring defense last season. They will also be taking on a number of teams in 2018 that are expected to have improved defenses including the San Francisco 49ers (twice), Green Bay Packers, and Detroit Lions.

A full year of film on Goff in Los Angeles’ current offense will likely benefit opposing defenses in 2018 as well. Smart defensive teams like the Philadelphia Eagles, Minnesota Vikings, and New Orleans Saints will quickly pick up on what his weaknesses were in 2017 and attempt to exploit them in their matchups next season.

On the defensive side of the ball for the Rams, there’s no debating the talent they now have after their recent acquisitions. But can they all play together nicely during the rough patches that usually occur during each NFL season?

Los Angeles’ big three additions on defense (Peters, Suh, and Talib) are not exactly what one would call “mild-mannered.” During their NFL careers, these three players have missed a combined 10 games due to suspensions and paid over $2.2 million in fines according to Spotrac. All three were let go by their former teams reportedly for issues inside the locker room, among other reasons.

This experiment could go either really well for the Rams or it could resemble something that looks closer to the result of someone putting Mentos into a bottle of Coca-Cola. If Los Angeles goes on a two- or three-game losing streak next season, will their new locker room be able to keep it together and find a way to get back on track?

So while it is really fun to make offseason predictions, let’s not get too carried away before any actual games are played. Just ask the 2011 Philadelphia Eagles how many Super Bowls they won before the start of the season.