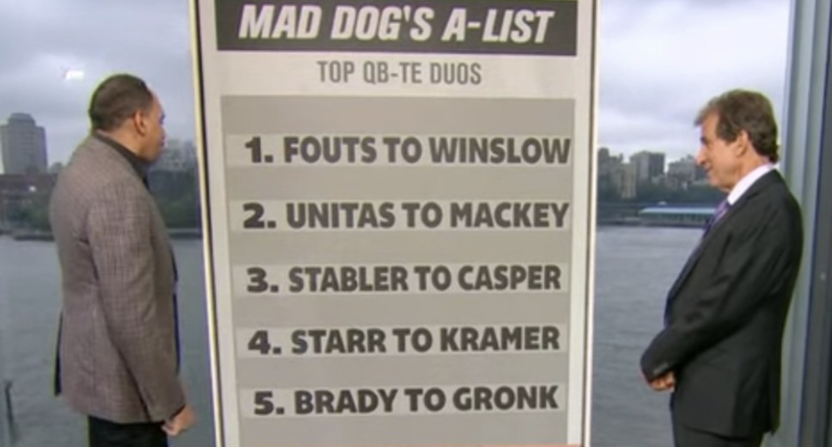 Russo has certainly made his mark on ESPN’s First Take, bringing an “old school” mentality to debates that have often veered so far into honoring players from another era that he’s been called out for it. And every time he makes an outlandish claim that seems to imply athletes were better back in the day, he earns his compensation in terms of the attention he brings to the show.

That was certainly the case with his most recent appearance when he unveiled this week’s Mad Dog’s A-List, in which he ranked his top QB-TE duos of all time.

Here is Mad Dog Russo's list of the top QB-TE duos ever. He's not even trying anymore. pic.twitter.com/hTbXBwCV3g

Russo’s list is topped by Dan Fouts-Kellen Winslow and followed by Johnny Unitas-John Mackey, Ken Stabler-Dave Casper, Bart Starr-Ron Kramer, and finally, Tom Brady–Rob Gronkowski. It’s vintage Russo, saying that the best duos played in the 60s, 70s, and 80s, and barely including anything from the modern era despite the fact that Brady-Gronk is, statistically, miles ahead of every duo ahead of them.

So effective were Brady and Gronk together with the New England Patriots and Tampa Bay Buccaneers, they are the No. 2 duo all-time in terms of touchdown passes, ahead of some of the greatest QB-WR tandems in NFL history. Not to mention they won four Super Bowls together.

Naturally, Russo’s reliance on the old-school “things were better back then” mentality set the NFL world ablaze with reactions and hot takes.

absolute perfection. laughed out loud just reading the graphic. this production meeting must have been funnier than snl. they had to be dying. https://t.co/nbtcCQTxaR

"What if Remembering Some Guys was personified?" https://t.co/KUkHCpDrqH

This is absolutely the funniest thing I have ever seen. It cannot be real. https://t.co/mgnZKOId6Q

Nothing but respect for Mad Dog for not acknowledging any athletes that came after iPhones were released https://t.co/V4kYHmM6ra

I admire Russo’s “when NFL Films used to be better” gimmick https://t.co/tMzdUuX22z

Honestly, if we found out that Chris Russo was being paid by ESPN to purposefully generate memes and quote-tweets, we’d believe it.