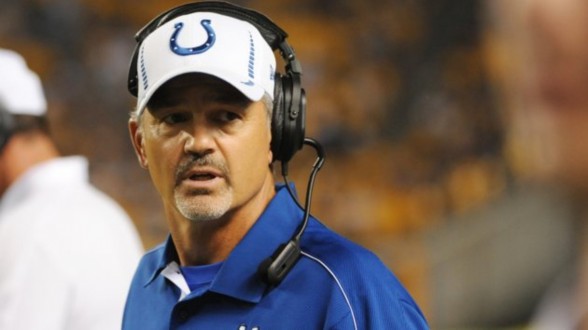 The Indianapolis Colts can still make the playoffs as AFC South champions, but everyone knows that the Colts need 974 things to happen (well, more than seven — let’s put it that way) on Sunday in order to pull off that feat.

If the improbable does not happen, the Colts’ head coach is gonzo… or perhaps, Pa-gone-o.

THIS JUST IN: Colts do not plan to retain Chuck Pagano at end of season, barring playoff berth. (via @MikeWellsNFL) pic.twitter.com/V4UwGc9DuE

Just 11 months ago, the Colts played the New England Patriots in the AFC Championship Game. Pagano engineered an upset of the Denver Broncos on the road in the divisional playoff round. He had achieved as much as he realistically could have within the context of the 2014 NFL season. The Patriots were better than the Colts, and better than everyone else.

The Colts, however, were supposed to be better in 2015. They brought in Andre Johnson and Frank Gore, among others. Say what you want about the quality of those moves; the aim could not have been more transparent. Bringing in high-end names represented an obvious attempt to match and then exceed the Patriots.

It all blew up in Pagano’s face.

Friction inside the locker room and in relationship to the organization bubbled over, just two weeks into the season. The Colts learned what it was like to wear a larger target on their backs, and they learned the hard way. Is Pagano primarily responsible for this great unraveling in Indianapolis? That’s for other people to decide. However, he certainly shared the responsibility with many others on and off the field. In the NFL — right or wrong — that’s going to lead to quick divorces, even after reaching the penultimate round of the NFL playoffs, one stop short of the Super Bowl.

The focus of the NFL community immediately pivots to two questions: Where will Pagano go, and which coach will come to Indianapolis to coach Andrew Luck?

Pagano would be well received in Miami as the next coach of the Dolphins. He coached for the Hurricanes under Butch Davis — his name carries some weight in South Florida. It’s not as though Pagano failed with the Colts; it’s more that his relationship with the organization turned sour. Pagano’s credentials will make him a very attractive candidate for other teams, and Miami should be at the head of the pack.

As for the Colts, the idea of Chip Kelly — a former Oregon coach — teaching former Stanford quarterback Andrew Luck is enticing and sexy. Yet, the idea is also not realistic. The difference in styles might be so pronounced that the coach’s way of playing and the quarterback’s way of processing the sport might never be brought together in an effective way. Yet, it’s going to be impossible for Kelly’s name to be completely excluded from the conversation when a non-Philadelphia NFL opening emerges.

One would think that no matter which man comes to Indianapolis, the head coach will be someone with an offense-first inclination, someone who will get the best out of Luck and cultivate his talents — ideally (if everything goes well) for the next 10 years. Perhaps the Colts can get a highly competent coach with a defense-first emphasis and an excellent offensive coordinator. That approach could certainly work, but the smart money would seem to suggest that the Colts need a masterful mentor for their franchise quarterback. They can tend to their defense by plucking a prime coordinator.