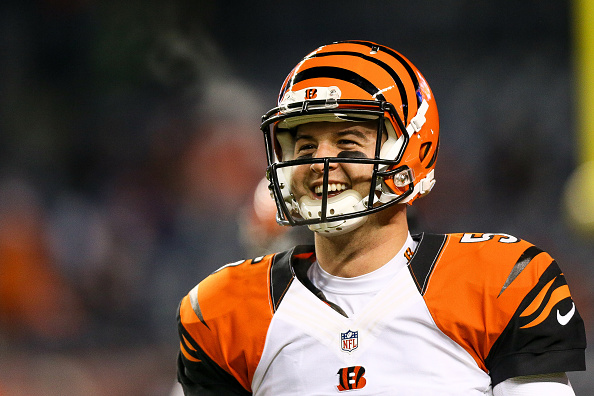 Andy Dalton will start at quarterback for the Cincinnati Bengals when they play the Green Bay Packers on Sunday, and it’s easy to understand why. Dalton is technically a three-time Pro Bowler (he was a last-minute replacement on all three occasions) and he’s costing the league’s cheapest and most stubborn team $15.7 million this season. So nobody should be surprised that he remains in that role despite the fact he’s off to a comically bad start.

But the Bengals would be better off giving a shot to Dalton’s backup, AJ McCarron.

This has to do with the status attached to both quarterbacks, so let’s start with Dalton. It should be established that his poor first two games — he ranked dead last in the NFL with a 47.2 passer rating and has five turnovers without throwing a single touchdown pass — are not a total fluke.

Dating back to the midway point last season, his last 10 games look like this: 3-7 record, nine touchdowns, nine interceptions, a 6.6 yards-per-attempt average and a passer rating of 78.0. Only four qualified quarterbacks had lower ratings in 2016.

He never could perform under pressure — literally and figuratively — and now he’s regressing as opposing defenses figure him out. That regression has been exacerbated by the fact he has less support than in the past, especially in pass protection. But that doesn’t change the fact Dalton — who has a completion percentage of 55.7, a touchdown-to-interception ratio of 1-to-6, a passer rating of 57.8 and on 0-4 record in four career playoff starts — has probably peaked.

The Bengals won just six games last season. They’re unlikely to win more than that in 2017. They held on to McCarron throughout the offseason for a reason. He was reportedly in high demand, but Cincinnati wouldn’t trade him. That could have to do with the fact Dalton is essentially on a year-to-year contract. If they truly believed he was their long-term answer, they’d have traded McCarron for someone valuable who could actually make an impact in 2017.

But they kept a backup quarterback who may or may not become an unrestricted free agent next offseason. If he doesn’t — they’re waiting on a ruling regarding whether his first year in the league counted as an accrued campaign — he’ll hit the market one year later. Either way, there isn’t a lot of time to find out once and for all what McCarron is made of as an NFL starter.

Hall of Fame QB Troy Aikman: AJ McCarron Another one of those Alabama guys who lets be honest those guys just expect to win pic.twitter.com/eU519b1EQt

We do know the Alabama product was impressive as a spot starter in 2015, completing 66.4 percent of his passes while throwing six touchdowns to two interceptions and posting a 97.1 rating while winning two of his three starts. He didn’t throw a pass the year before or after that, but the hype exists for a reason.

If Dalton and the Bengals fall flat again in Week 3 — and that’s highly likely against the Packers — they’ll be 0-3. They won’t have a lot to lose at that point, which is why McCarron should take the reins for at least a short trial period.

In fact, that should start now. But it isn’t, and I’m not confident that the Bengals will come to their senses and make a quarterback change anytime soon.