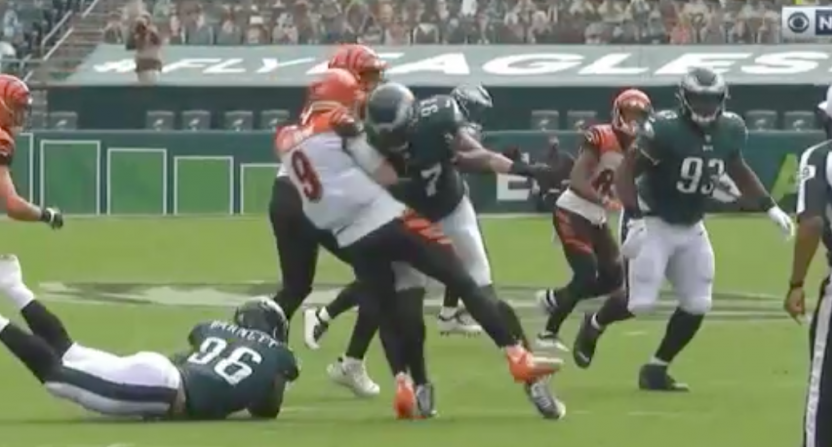 It has not been a very good weekend so far for LSU Tigers faithful.

First, their beloved LSU Tigers became the first defending college football champs in 20 years to open their next season with a loss, getting torched by Mississippi State quarterback K.J. Costello in a 44-34 home defeat.

Now, Joe Burrow, the hero of last year’s championship squad and the No. 1 pick in the NFL Draft, got his “welcome to the NFL” moment on Sunday after a scary hit that briefly knocked him out of the game.

The Cincinnati Bengals traveled to play the Philadelphia Eagles on Sunday and Burrow was hoping to continue proving his worth as the latest potential savior of his new franchise. Early on the game, he was scrambling away from a defender to complete a pass, which left him open to get absolutely rocked by 6-5, 290-pound, Eagles DT Malik Jackson.

Joe Burrow got ROCKED. Yikes. Still down on the ground. Obvious flag. pic.twitter.com/AHxhS7Z4oN

Burrow did return to the game a play later (somehow) while Jackson got dinged with a roughing the passer penalty. Some folks thought that while the hit was devastating, it wasn’t actually worthy of a penalty.

This is something that Burrow is going to have to get used to. He was sacked three times and hit hard seven times in the Bengals’ last game, sacked three times in the season-opener before that, and it doesn’t look like the offensive line is up to that task of protecting him as needed. The Eagles have three sacks on Burrow at halftime already.

Unfortunately, the Bengals have a long history of young savior quarterbacks who fizzle out quickly, sometimes due to talent and sometimes due to a lack of quality players around them. Burrow clearly has the talent, but it’s a question of whether or not he’ll survive long enough to make good on all that hype.