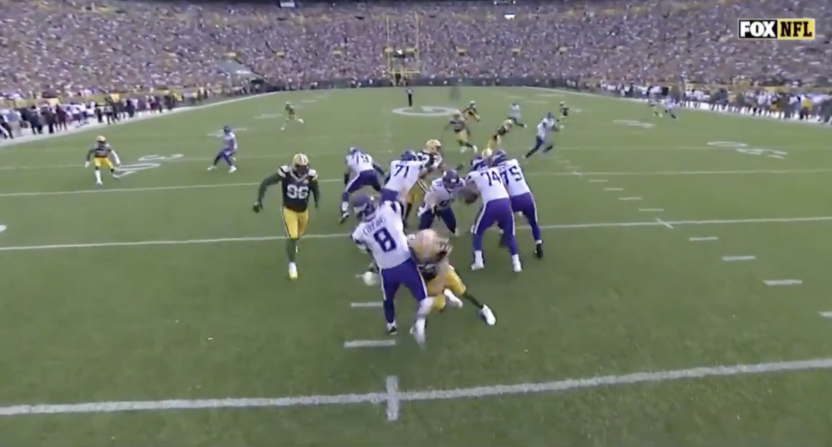 Referees are human and humans make mistakes, there’s just no way to get around that. Referees in any sport have a tough job and the moment they make a mistake, it’s out there for the world to see and they’re subject to endless ridicule from everyone.

This, however, is somewhat different. When Clay Matthews sacked Kirk Cousins on Sunday, he did it the right way but was still subject to a 15 yard penalty for roughing the passer and that contributed to the second tie game in as many weeks.

The referee is going to get the blame but it’s not really his fault. Instead, it’s this box that the NFL has put referees in that any hit to the quarterback, whether legal or illegal, could be a roughing the passer penalty and no one knows what will happen.

#Packers LB Clay Matthews appeared to catch himself with his left arm while taking down #Vikings QB Kirk Cousins on this play, but was still called for roughing the passer pic.twitter.com/5u4nYcQg7G

Exactly what is Clay Matthews supposed to do? He isn’t targeting Cousins and isn’t going for his head or knees. Instead, Matthews goes for the chest and even lets up on his hit moments after Cousins threw the ball. By giving Matthews a 15 yard penalty, the NFL is expecting Matthews to bend the space time continuum and somehow avoid making any sort of contact on the quarterback. I’m someone who wants this game to be as safe as possible and even I think this is a bunch of BS.

Just like the catch rule, the NFL has employed a kind of Who’s Line is it Anyway where the rules are made up but in this case, the points do matter because it cost the Packers a win. Nobody knows what the actual rule is or how to interpret it because the NFL has dissected the rule to such a degree that it’s impossible to know what’s legal or not. The players don’t know, the experts who write and talk football don’t know, Roger Goodell certainly doesn’t know and the officials don’t know either. Instead, it’s all a judgment call where everyone has a different interpretation of the rule and based on that, games and potential jobs are being decided.

If anything is going to cause people to stop watching football, it won’t be for the variety of reasons people typically put out. It’ll be because fans finally get fed up at the apparent randomness of the penalties costing teams games. Many people want to say that the NFL will eventually turn into flag football because they want to take the physicality out of the game. At least if it’s flag football, the rules might be more simplified as a result.