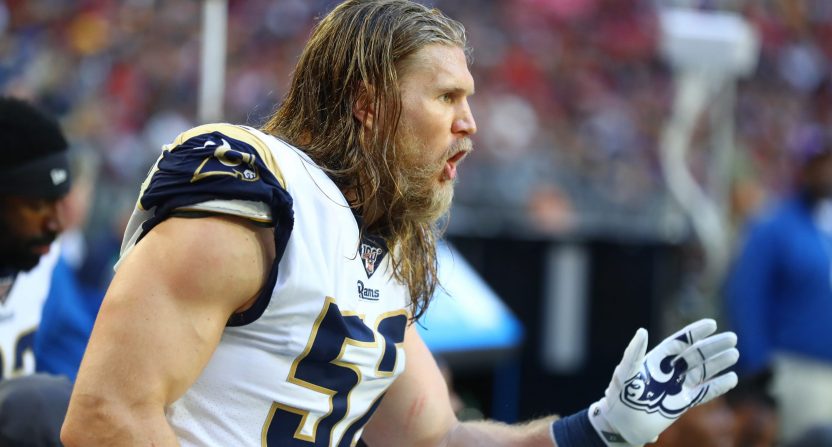 The Broncos are set to open their season Monday night against the Titans, and they’re going to be doing it without their best outside pass-rusher.

Von Miller went down with what is likely a season-ending tendon injury at the end of practice on Tuesday, and in the days since, Denver has apparently been looking for a way to replace his production. That lead them to former Packer Clay Matthews, currently a free agent embroiled in a grievance against the Rams, who released him in March.

That meant he’s available, and while his production last season wasn’t at his peak, eight sacks in thirteen games is still fairly impressive. So it’s no surprise the Broncos would reach out. Unfortunately for them, Matthews turned down their offer:

Denver expressed interest in signing former Rams’ and Packers’ LB Clay Matthews, but was told he is “not going to play,” per source. Matthews would have been a strong replacement for the injured Von Miller.

Schefter’s initial tweet read to many as though Matthews wasn’t going to play at all this season, which his camp quickly corrected:

To be clear: Clay Matthews wasn’t willing to play right now for what the Broncos offered. He is still open to play for the right opportunity for him and his family. https://t.co/t65u5V4Xge

That Rams grievance is probably the sticking point here, too. Considering Matthews is possibly in line to collect the $2 million in guarantees he feels he’s owed by Los Angeles, signing any new deal would essentially just draw down against that figure.

The #Rams owed Clay Matthews a $2 million bonus before he was cut this past March, and that’d be offset by any new contract he signs. So, it doesn’t make much sense to take a bargain offer. https://t.co/MpOXCli4xM

That makes sense from Matthews’ perspective, though it’s also understandable why the Broncos aren’t in a rush to offer Matthews more than $2 million this season.

It really highlights how poorly-timed Miller’s injury was, too, though. Obviously there’s never a good time to lose a player like Miller, but had it come a few weeks earlier, Denver would have been in a better position, considering the wider pool of camp cuts and waiver wire opportunities as teams cut down their rosters for the start of the season.

For Matthews, meanwhile, he’s in a waiting game. His position is that the Rams should pay that bonus and he shouldn’t be subject to a contract-matching stipulation. It’s possible that his best chance to beat that $2 million figure is if a pass-rusher gets hurt playing for a team during the season that has a clear path to the playoffs. Though if the downside is making $2 million to not play, there are certainly worse outcomes.