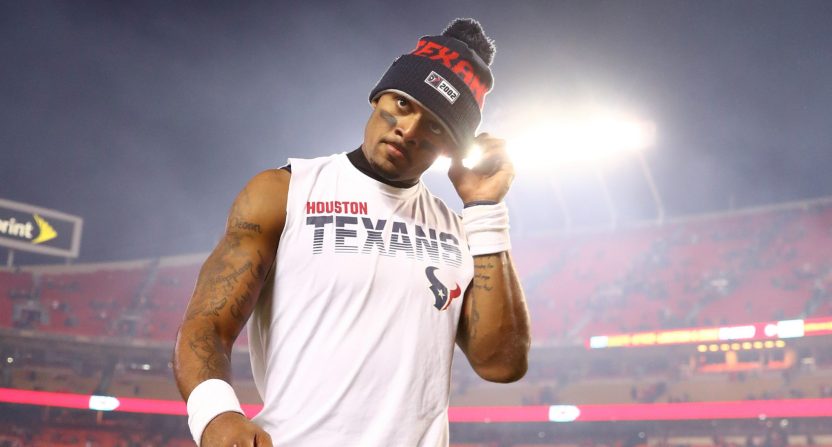 The NFL world was shocked when it was reported that Houston Texans quarterback Deshaun Watson would waive his no-trade clause for the Cleveland Browns, which quickly led to the Browns trading three first-round picks as well as a third-round pick and a fifth-round pick for the three-time Pro-Bowler.

This is after Watson had seemingly narrowed down his list to the Atlanta Falcons and the New Orleans Saints on Tuesday, before having a change of heart that took everyone by surprise.

This wasn’t the only move that the Browns made on Friday, as following the trade the team reportedly signed Watson to a massive five-year extension worth $230 million, with all of the money in the contract fully guaranteed.

Deshaun Watson gets a fully guaranteed 5 year $230M contract. That is $80M more than the previous record for fully guaranteed money at signing ($150M). This deal was negotiated by David Mulugheta of Athletes First. https://t.co/nQls9WRpD1

The controversial quarterback will receive the most fully guaranteed money of any player in the league, which has the NFL world talking and questioning exactly what the Browns are thinking considering the ongoing civil cases that Watson is still facing.

The mastery of @DavidMulugheta's work isn't just this byline. The no-trade clause he negotiated gave him insane leverage. He fought for that no-trade clause which, at the time, seemed like a complete afterthought to the Texans and everyone else. #brilliantagenting@AthletesFirst https://t.co/ABV7qZiWPa

Deshaun’s lawyer and his agent are both First Ballot Hall of Fame in their fields https://t.co/eV7y1HM1ZQ

Amazing. The guy gets accused of 20+ sexual assaults, takes a year off, and not only lands on a better team but gets a massive, guaranteed raise. https://t.co/2Gf3igXOgj

The Browns have their “adult.” https://t.co/YEhAzGIuD9

It is certainly a perplexing move by the Browns with all of the controversy still around Watson. Even if you are going to trade for him, I’m not sure it makes sense to give him this kind of money.

It is worth noting that if Watson were to be suspended, it will come out of his 2022 base salary, which is $1 million.

Important contract note for Deshaun Watson, who got a 5-year, $230M contract. His base salary for 2022 is $1M, which means if he’s suspended, it’ll come out of that base.

Regardless, giving the keys over to someone with some very clear questions to their character on this type of money like the Browns are doing to Watson is certainly a very questionable move.

Reports came out that the Browns wanted an “adult” at quarterback following Baker Mayfield’s tenure with the team, but it certainly doesn’t seem like they will be getting that with the acquisition of Watson.