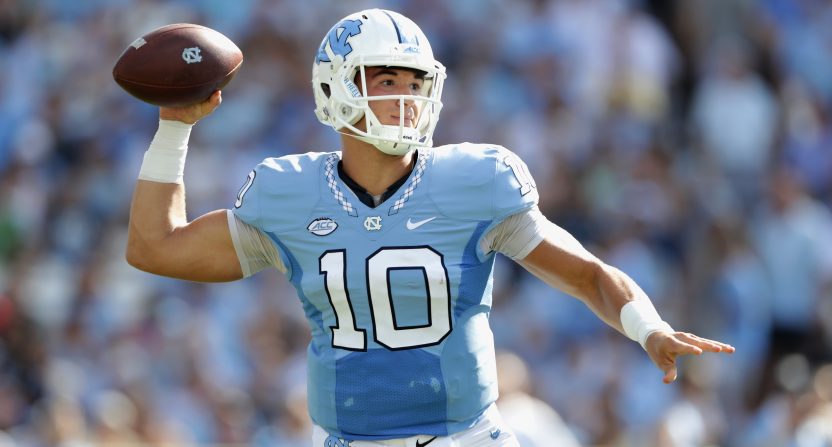 The Cleveland Browns have the No. 1 overall pick in this year’s NFL Draft, and the common assumption is they’ll have to choose between the best player available and a player who fills a need, particularly quarterback.

However, there’s a chance the Browns will be able to do both.

The Browns also have the No. 12 pick in the first round and according to football operations director Sashi Brown, they’re considering trading up to get two top picks, even if that goes against their stated strategy of getting as many picks as possible. From Cleveland.com:

“We are open to it,” Brown said during his pre-draft press conference. “Generally, we value picks. We think no matter how prepared you are there is always a lot of uncertainty in the draft. Every team misses. We’re not going to be different in that regard. We like young talent.

“We’ve said the draft is going to be the pipeline. We don’t want to get into a habit of turning two picks into one, so to speak. We just don’t think that is a good way to do business over time.”

The reason the Browns might be willing to buck their strategy is they need to finally find a franchise quarterback. The Cleveland Plain Dealer’s Mary Kay Cabot reports that the target could be North Carolina’s Mitchell Trubisky:

At the NFL owners meeting last month, Brown admitted he’ll do what it takes to land that elusive franchise quarterback.

“We’ve shown we want to be aggressive and that doesn’t necessarily mean that something’s going to get done,” he said. “We don’t want to force things just to have things happen, but we are going to stay aggressive at quarterback as we will all positions.”

There are other quarterbacks sure to be available if Cleveland stands pat at No. 12, such as Clemson’s DeShaun Watson and Texas Tech’s Patrick Mahomes. But Brown and head coach Hue Jackson are reportedly enamored with Trubisky and think he could be the team’s star of the future (in both the near- and long-term).