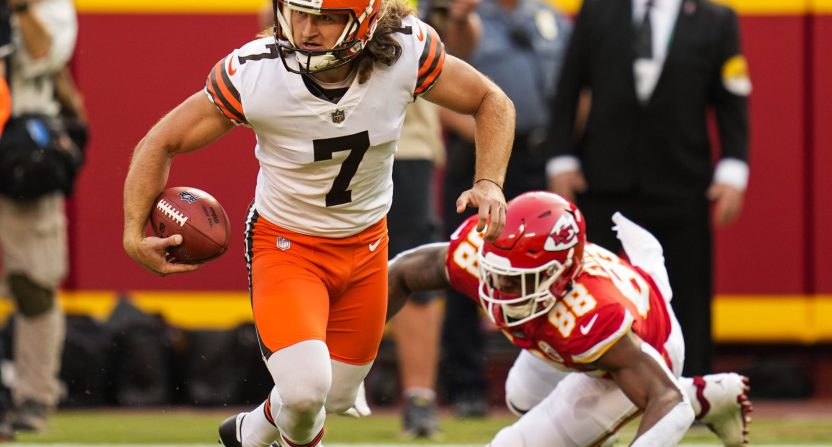 The Cleveland Browns have been dealing with tons of roster issues in the past couple of weeks as a bunch of players tested positive for COVID-19. The sage not only led to their game getting delayed but also to Nick Mullens getting the start at quarterback while Baker Mayfield and Case Keenum were out.

Now, some of those players are returning to the roster but one fan-favorite will not be among them. Per NFL Network’s Tom Pelissero, the Browns have waived punter Jamie Gillan, a.k.a. The Scottish Hammer.

A surprise: The #Browns are waiving punter Jamie Gillan, per source.

“The Scottish Hammer” was an all-rookie team pick in 2019 and hadn’t missed a game in three seasons before landing on the COVID list recently. Now, an intriguing name on waivers.

In a bit of an ironic twist, Gillan originally got the job in 2019 by beating out Britton Colquitt for the role. Now, he’s lost his job to Dustin Colquitt, Britton’s brother. So it goes.

The Scottish native was an undrafted free agent rookie out of Arkansas-Pine Bluff in 2019 and he was named to the Pro Football Writers Association’s all-rookie team that year. His career-long is a 71-yarder he kicked in 2019 and he’s just shy of 7,000 punting yards on his career. However, his production fell off recently, especially in 2021.

The NFL is a what-have-you-done-for-me-lately business, especially when it comes to kickers. Dustin Colquitt has simply punted better in the last two weeks, placing four punts inside the 20-yard-line. That was enough for Cleveland to decide it was time to make a change.

While many Browns fans knew this day was coming, they’re still sad to see the Scottish Hammer go.

Am I the only one to have a punter shrine in his basement? 🤣

That Scottish Hammer is still pretty cool though 🤙 pic.twitter.com/6GdEL9dW7A

“Scottish Hammer” turned into the “Scottish Thumbtack” this season.

Such a feel-good story in 2019.
Great dude. But his production has plummeted of late. This is a “What have you done for me lately business.” #Browns https://t.co/6DC8LGH0MU

Sorry it didn't work out with Jamie Gillan. The Scottish Hammer is such a great nickname. Just needed more production on the field. Good luck to him.

It’s not really a surprise if you have watched this season. Leg just hasn’t been there. https://t.co/Uqvaeof2Un

We’ll see if the Hammer catches on elsewhere in the NFL. At least we’ll always have the novelty beer named after him.