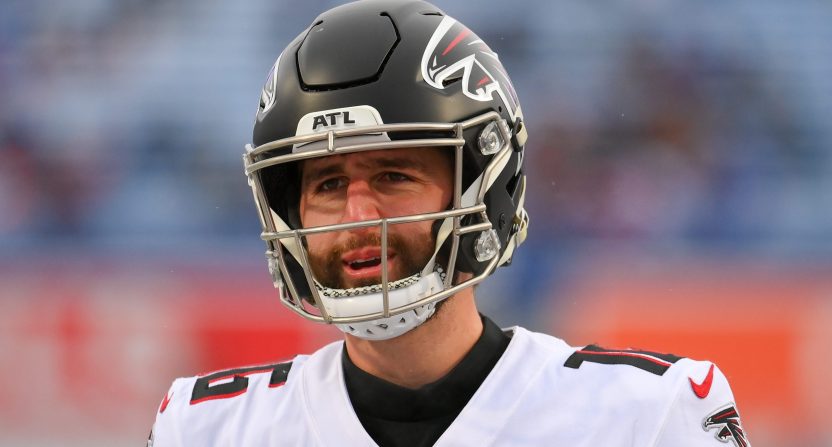 And then on Thursday morning, news emerged that the Browns worked out veteran quarterbacks A.J. McCarron and Josh Rosen. With a potentially lengthy suspension coming for Deshaun Watson, Cleveland is in search of quarterback depth and potentially even competition for Jacoby Brissett.

Well, on Thursday evening, ESPN’s Adam Schefter reported that the Browns are signing Rosen to a one-year contract.

Cleveland is signing former first-round Josh Rosen to a one-year deal, per sources. Despite spending time with five other NFL teams,

Rosen is only 25 years old and those who have been around him believe he is ready to prove he belongs.

As Schefter notes, this is Rosen’s fifth team, which is pretty hard to believe when considering how highly regarded he was as a quarterback prospect not long ago.

When Jim Mora Jr. was head coach at UCLA in 2016, he said that Rosen — the Bruins’ quarterback at the time — would’ve been the No. 1 overall pick in the 2016 NFL Draft, had Rosen been eligible (what’s especially bizarre is that Mora then went on a Rosen bashing tour in 2018).

Rosen’s stock fell a bit between then and the 2018 NFL Draft, but he was still the No. 10 overall pick by the Arizona Cardinals, just three picks after the Buffalo Bills selected Josh Allen (Baker Mayfield, ironically, went No. 1 to the Browns, and Sam Darnold went No. 3 to the New York Jets; Lamar Jackson went No. 32 overall to the Baltimore Ravens, so three quarterback-drafting teams whiffed badly there).

Rosen was traded to the Miami Dolphins in 2019 after the Cardinals selected Kyler Murray (who signed a massive contract extension earlier Thursday) with the No. 1 overall pick of that year’s draft. He was waived in 2020 and signed to the Tampa Bay Buccaneers practice squad, but he never played a game for the Bucs. He signed with the 49ers later in 2020 and remained with them until being waived in Aug. 2021. Days later, he signed with the Atlanta Falcons and played four games in 2021 as Matt Ryan’s backup, completing 2-of-11 passes for no touchdowns and two interceptions.

Still, Rosen is just 25 years old. Maybe the former heralded prospect still figures it out, but he’s probably running out of chances all the same.

And there may not be a better chance to make the most of an opportunity than the situation in Cleveland, where the quarterbacks in place are Brissett (who’s more of a “good backup” than starter) and Joshua Dobbs, assuming Watson is forced to miss some time (and perhaps a large portion of the season). Rosen could really use a great training camp showing in the coming weeks.