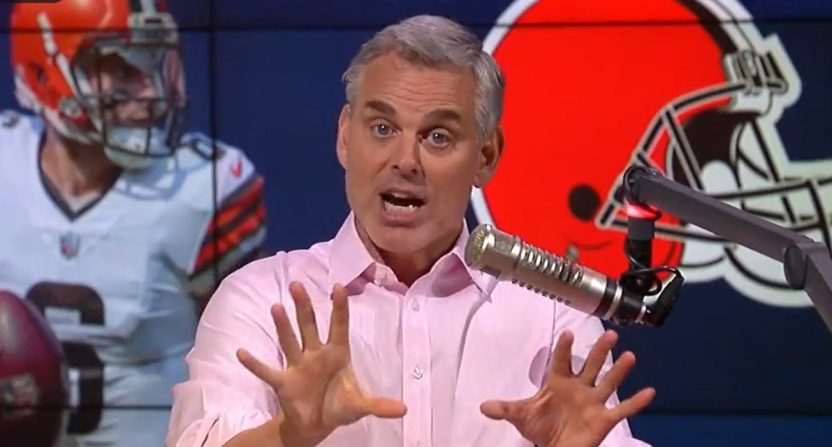 It’s been three weeks since Baker Mayfield asked for a trade and more than two since the Cleveland Browns acquired Deshaun Watson.

Despite both sides wanting a divorce, Mayfield and his $18.8 million salary remain in Cleveland and the trade market for the disgruntled quarterback appears dry. League executives are reportedly “shocked” that Cleveland hasn’t found a new home for Mayfield, but Fox Sports Radio host Colin Cowherd believes he has the answer.

Baker Mayfield's market has shrunk for a reason…

"That's the downside to lots of commercials, a big personality and magazine covers." — @ColinCowherd pic.twitter.com/Z7gXPP0BFA

“I don’t know why anybody would be shocked,” Cowherd said. “He costs $19 million a year, almost, he’s got a little bit of a toxic personality and he had a bunch of injuries at the end of the year so all of this was incredibly predictable.”

When there’s drama surrounding Mayfield, expect to hear from Cowherd. And he didn’t disappoint on his Wednesday afternoon radio show, boldly claiming Mayfield’s personality is the culprit for the lack of teams showing interest in his services.

“Baker Mayfield made a mistake,” Cowherd continued. “Most quarterbacks that are great, are boring…you have to be totally committed and you have to be a serious person.”

According to Cowherd, teams would rather settle for a less talented quarterback than try to fit Mayfield’s brand into their culture.

“When Baker Mayfield did 20 commercials and magazine covers, he sent a message,” Cowherd said. “‘Money and personality matters to me.’”

“When you develop this big personality, you’ll get a chance to be a franchise guy,” Cowherd continued. “But the minute you’re looking for a second job…you’re just a bridge guy. That’s why [Mitch] Trubisky had multiple suitors because the Steelers believe they can fold Trubisky into their culture.”

Cleveland selected Mayfield No. 1 overall in the 2018 NFL Draft and he appeared to settle in as their franchise quarterback, leading the Browns to their first playoff appearance in nearly two decades during the 2020 season. But Mayfield regressed significantly last season, causing him to be a quarterback without a stable home after Cleveland controversially decided to acquire Watson from Houston.