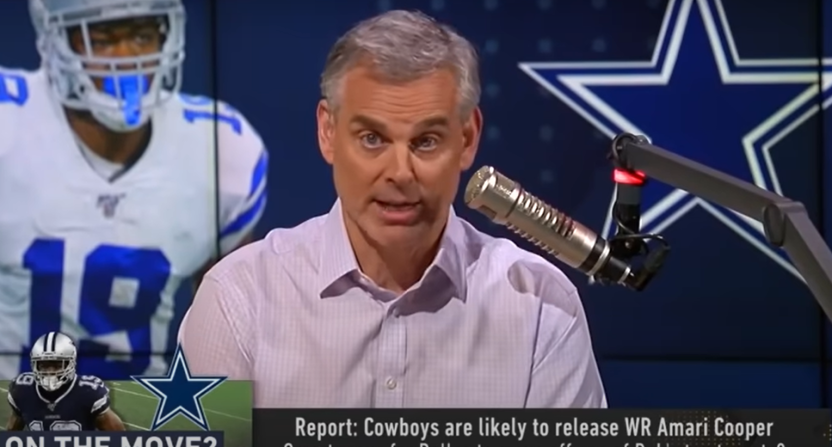 The Dallas Cowboys are expected to release superstar wide receiver Amari Cooper when the new league year kicks off next week. According to Fox Sports Radio’s Colin Cowherd, Cooper’s exit has more to do with his vaccine status than his salary cap hit.

“I said, be unvaxxed at your peril,” Cowherd explained on his Fox Sports Radio show. “Owners are going to hold grudges. Cowboys are moving off Amari Cooper who is unvaxxed.”

During the season, the NFL reported nearly 95 percent of its players were vaccinated against COVID-19, but Cooper was one of the few who refused the jab. When the four-time Pro Bowler missed two games last November after landing on the reserve/COVID-19, Cowboys owner Jerry Jones noted how Cooper’s vaccine status was detrimental to the team.

“This is a classic case of how it can impact a team when people are, at the end of the day, this is not individual; this is a team. You cannot win anything individually,” Jones told 105.3 The Fan of Cooper last November.

In addition to Cooper, Cowherd cited unvaccinated players Cole Beasley and Carson Wentz, who are both expected to be on the trading block this NFL offseason. Although the NFL recently announced all aspects of the league’s COVID-19 protocols would be suspended immediately, Cowherd believes the damage was done last year.

“The owners are ticked off,” Cowherd ranted. “Don’t give me this cancel culture nonsense. You have a right to be unvaxxed! But you don’t own the business. And if you tick off the owner like Carson Wentz in Indianapolis and [the owner’s] not happy with your play, that’s just another reason for the person who runs the franchise or owns it to go ‘no, you popped us, we’re gonna pop you.’”

Cooper is entering the third season of his five-year $100 million deal with the Cowboys. Releasing the 27-year-old veteran wideout would reduce his cap hit for the 2022 season to $6 million for Dallas, who is projected to be $21 million over the salary cap.