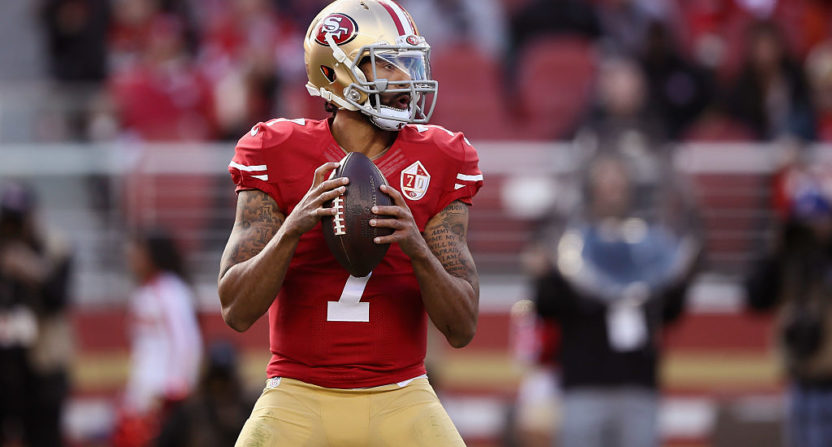 Colin Kaepernick is pretty clearly more talented than plenty of quarterbacks that currently litter NFL rosters. Indeed, he’s likely more talented than plenty of starting quarterbacks littering NFL rosters, and now that Aaron Rodgers is out for the foreseeable future, we can add Green Bay to the list of quarterback situations that would likely be improved with the addition of the competent dual-threat qualities Kaepernick brings to the table.

However, Colin Kaepernick is not on an NFL roster, and it’s not because he isn’t interested. It seems pretty clear, at this point, that Kaepernick isn’t in the league because he knelt during the national anthem last season to protest unjust police violence against black citizens. But surely, at some point, a team would realize that a better chance to win games would be worth more than that background, especially considering Kaepernick’s protests have spread around the NFL at this point?

Just today, for example, Jameis Winston got hurt and Ryan Fitzpatrick came into the game and did this:

If it were truly 32 teams independently weighing the options at hand, their respective quarterback situations, and all the other factors involved, one of them would have likely signed Kaepernick. It just seems so improbable. Improbable enough, in fact, that Kaepernick has reportedly filed a grievance under the NFL’s collective bargaining agreement alleging collusion among league ownership.

That was first reported by Bleacher Report’s Mike Freeman:

I am told that @Kaepernick7 has filed a grievance under the CBA for collusion against the owners. If accurate, this is huge.

More: @Kaepernick7 is preparing statement about his filing of grievance against owners for collusion under CBA. It should be released soon.

Well then! This is actually a very fascinating development, because any grievance or resulting court battle could result in the NFL being forced to hand over communications and correspondence regarding Kaepernick. And that’s a very big deal. The league’s recently announced stance against players protesting during the anthem is also a reasonable point; if the NFL had institutionalized disapproval of the practice, it’s likely they had documented conversations when the issue first sprang up around Kaepernick last year.

Collusion can be difficult to prove, of course. Barry Bonds was very possibly blackballed from MLB, but he was never able to prove anything. (Of course, no one was in a rush to advocate for Barry Bonds, far from beloved even among his fellow players. But even then, Bonds was clearly on the wrong side of the aging curve, and teams could at least feign performance-based reasoning.

Go watch that Ryan Fitzpatrick play again, or read things like this from Mike McCarthy in the wake of Green Bay probably losing Aaron Rodgers for the year:

McCarthy: As far as the QB position, Brett Hundley is my quarterback, Joe Callahan is the backup. That's the direction we're going. #GBvsMIN

There’s no way an objective reading of available players relative to Kaepernick’s talent results in someone thinking he shouldn’t be in the league anymore. This is at the very least an avenue well-worth exploring, and the league’s reaction will be revealing.