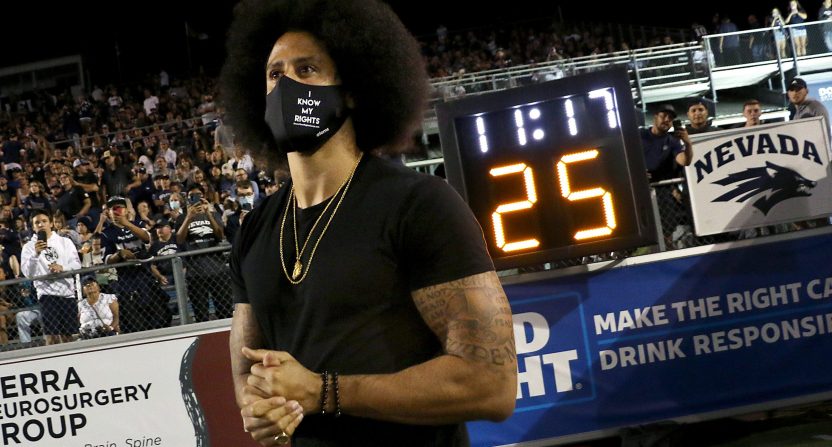 Colin Kaepernick has been in the spotlight this NFL offseason after announcing that he would love to return to play football in the 2022 NFL season.

The 34-year-old quarterback has not taken a snap in an NFL game since the 2016-17 season, but has taken part in numerous workouts this offseason that give optimism that he still has something to offer to NFL teams.

To this point, there have been a few teams that have appeared interested, but seemingly no significant favorite that looks obvious for his return.

Kaepernick (seen above at his induction into the Nevada Sports Hall of Fame last fall) spoke on the “I AM ATHLETE” podcast on Monday, where he said he is willing to compete on an NFL roster under any circumstances, even if that means it was to be in a backup role.

He did a role-play situation with former NFL wide receiver Brandon Marshall acting like an NFL owner, where he discussed the reasons why he believed he should be signed to an NFL roster.

“Let me come in and compete and show you what I can do,” said Kaepernick.

Marshall brought up the possibility that Kaepernick could be too big of a distraction for an NFL team, where Kaepernick had an excellent response.

“You can know from my experience. My coach Jim Harbaugh spoke to it. My coach Chip Kelly spoke to it. They said that I made the locker room better. I came in, I prepared, and I made the locker room better. That 2016 season, my last year, my teammates voted me the most courageous and inspiring player. So when you talk about the people in the building, it has never come out that I have been a distraction.

Marshall then brought up that fans could be against their team picking up Kaepernick given that he is seen as controversial by some.

“You have ‘end racism’ in the back of your end zone. You have ‘Black Lives Matter’ on your helmet. Everything that I have said should be in alignment with what you are saying publicly,” said Kaepernick.

Colin Kaepernick said on the @IAMATHLETEpod that he still wants to get back in the NFL and is willing to take a backup job to get in.

How do you convince an owner or GM to bring you in and how do you get a fanbase to buy in? Here is Kaepernick's answer: pic.twitter.com/ReyVvR7yOb

Kapernick then again made the case that he should be given a chance to compete, and if he isn’t good enough, then the teams should just cut him.

It remains to be seen if any team will be willing to take a chance on Kaepernick this offseason. This may be one of the last years that he can truly compete for an NFL roster spot, given his age and how long he has already been away from the league.