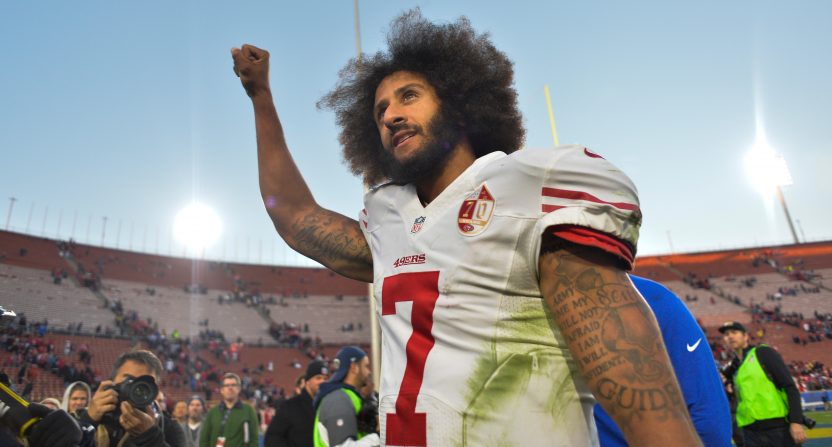 The NFL tried to have it both ways in their hastily planned workout for outspoken quarterback Colin Kaepernick this Saturday in Atlanta. At least 24 teams were said to be at the Atlanta Falcons’ facility along with former NFL head coaches Hue Jackson and Joe Philbin, ready to assist. On paper, it seemed like the ideal situation that Kaepernick had been looking for as he hopes to re-enter the league three years after being essentially blackballed following his national anthem protest over injustice in America.

As many expected to happen, when Kaepernick’s team pushed back against the stringent demands that the league put on the workout, who could see it, and what the expectations should be, things changed quickly.

So what the heck happened here? Charles Robinson at Yahoo! Sports has a pretty strong handle on what went down.

Basically, the NFL presented a bad faith offer to Kaepernick’s camp from the start, alerting reporters about the workout before even telling Kaepernick’s camp. They also stayed quiet on details as well as why they’d decided to suddenly offer him a shot at getting back into the league (though it was later said Jay-Z’s involvement with the league was an impetus).

Everything you need to know about whether the #NFL tried to spring a public relations trap on Colin Kaepernick is inside these three grafs, which break down how Tuesday played out. If you won’t read the entire column, read these three grafs.

Every though it certainly felt like a trap, or something akin to it, Kaepernick said he would attend and give it a go.

I’m just getting word from my representatives that the NFL league office reached out to them about a workout in Atlanta on Saturday. I’ve been in shape and ready for this for 3 years, can’t wait to see the head coaches and GMs on Saturday.

Saturday arrived and that’s when things devolved quickly. First, per Robinson, the NFL wanted Kaepernick to sign a waiver that went above and beyond the normal type of waiver that players usually sign for workouts.

A few things triggered the move of the Kaepernick workout:

1.) There was a significant problem with the type of waiver #NFL requested. Kaepernick agreed to sign a normal Pro Day injury waiver. NFL asked for a more complex waiver with clauses about non-guarantees of employment.

Second, the NFL wanted sole rights to filming the workout and balked at Kaepernick’s camp wanting to film as well. That’s an understandable request given the circumstances and it’s not unthinkable to presume the NFL would withhold or even tweak footage in order to build a narrative.

2.) Kaepernick’s camp requested to tape the workout alongside the #NFL’s crew. They didn’t trust the NFL being the only ones with the tape. Kaepernick wanted it taped and released in its entirety to teams and the public after the workout. The NFL refused to allow them to tape it.

And so, as the NFL was calling Kaepernick’s bluff, his team bluffed, canceled the workout, and organized one of their own an hour away. The speed at which all of that came together leads one to believe they had a feeling this was going to happen and planned accordingly.

Colin Kaepernick’s workout at the Falcons’ training facility at 3 pm is off; his workout now will be at another Atlanta location at 4 pm today.

Here is the official announcement: pic.twitter.com/d9dIfJSbY3

“Because of recent decisions made by the NFL, the workout for Colin Kaepernick will be changing to an alternate location in Atlanta which will now start at 4:00 p.m.,” Kaepernick’s representatives said in a statement. “Further, all media will be invited to attend, and upon request be provided with the location.

“Additionally, Mr. Kaepernick requested all media be allowed into the workout to observe and film it, and for an independent film crew to be there to ensure transparency. The NFL denied this request. Based on prior conduct by the NFL league office, Mr. Kaepernick simply asks for a transparent and open process, which is why a new location has been selected for today. Mr. Kaepernick looks forward to seeing the representatives from the clubs today.”

And so, the workout moved to Charles R. Drew High School in Riverdale where NFL team representatives were welcome to watch Colin play. The fact that the location is actually closer to the airport suggests there was some solid thought put into picking a spot that was hard to pass up.

4.) It’s now up to the #NFL teams to decide if they want their reps to relocate to the new venue. They have been invited on-site in Flowery Branch. The new location will also make it far easier for teams to access the local airport, meaning NFL reps can attend and easily fly out.

Still, it sounds like at least some of the people who were lined up by the league are opting out.

Hue Jackson leaving Atlanta instead of assisting Colin Kaepernick now that the workout is open to the media [against the NFL's wishes] is so Hue Jackson.

The worst HC in the history of the NFL doesn't want to upset the league, he thinks he'll get another shot as HC one day.

So many lingering questions, not to mention Kaepernick has to go out there and perform on the football field in the middle of all this madness. He also will likely speak to media members who are now welcome at the workout. And it still might not make a difference. Clearly, the NFL was doing this to appease certain audiences or people and wasn’t in it for the redemption angle. They seem pretty fine letting Kaepernick hang out to dry. So it will be interesting to see where we go from here. Chances are the story of this day and what happens next will be talked about for some time to come.