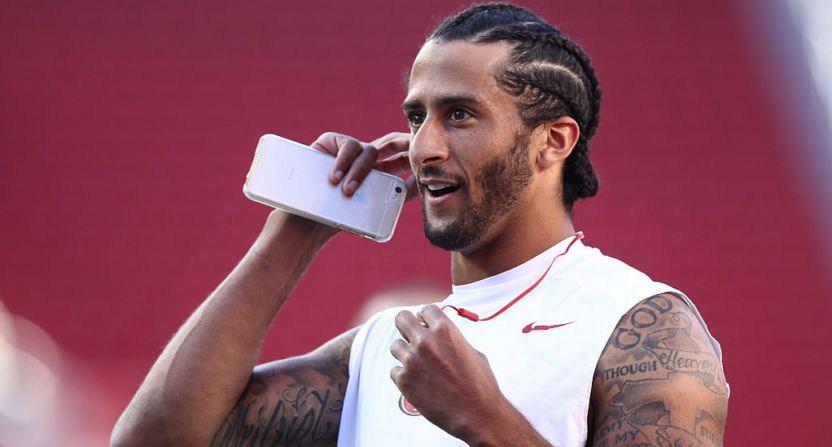 The NFL has not seen former San Francisco 49ers quarterback Colin Kaepernick on the field since the 2016 season, but the former NFL quarterback turned activist has the world talking about his ability to return to the NFL.

Kaepernick posted a video on social media on Thursday with the caption “Still working.” The video featured him showing off some of the moves that made him an NFL-caliber signal-caller.

According to Adam Schefter, Kaepernick is reportedly in “the best shape of his life” and still eyeing a return to the NFL.

Colin Kaepernick is still working out and is said to be, in the words of one source, “in the best shape of his life. He wants to play. He’s ready play. He would be a great fit for teams with QB vacancies to fill who want to win a Super Bowl.” https://t.co/VAXfKlZ6E4

Kaepernick has been controversial to some NFL fans following his decision to kneel for the national anthem while on the 49ers, and this new report has brought in a mixed reaction from the NFL world.

Some feel that, given Kaepernick’s credentials as a quarterback who led his team to a Super Bowl appearance, he should certainly be on an NFL roster.

It's not going to.

He is better then Carson Wentz …..and Half the other stiffs in the league now #NFL . https://t.co/rH3PzD2WMv

Not a scoop. I wrote on Feb. 22: "But I have it on reliable authority that he continues to work out on his own, football-type workouts, with the same dedication he had when he was employed. He is healthy and ready to roll, and would entertain any legit NFL offers." https://t.co/8I7kDoanJO

However, there are others that feel that Kaepernick’s time has passed to be a true NFL quarterback.

Don't do it Bucs fans… https://t.co/PWcNZGvRhj

Kaep has been in the "best shape of his life" every offseason since 2016. Benjamin Button or something, I guess. https://t.co/eXJh6VPLkK

Are we seriously still doing this? https://t.co/Wf7nAk9Ib8

While I am sure that Kaepernick would love to come back to the league, at this point, it just seems like a stretch after all these years. While many NFL teams are in need of a quarterback, it’s hard to imagine one would give him a chance after not doing so for this whole time.

It is still an interesting report that could possibly develop considering all of the teams that are in need of a quarterback this offseason. And there’s always the USFL if Kaepernick wants to play but doesn’t see a way back in the NFL.