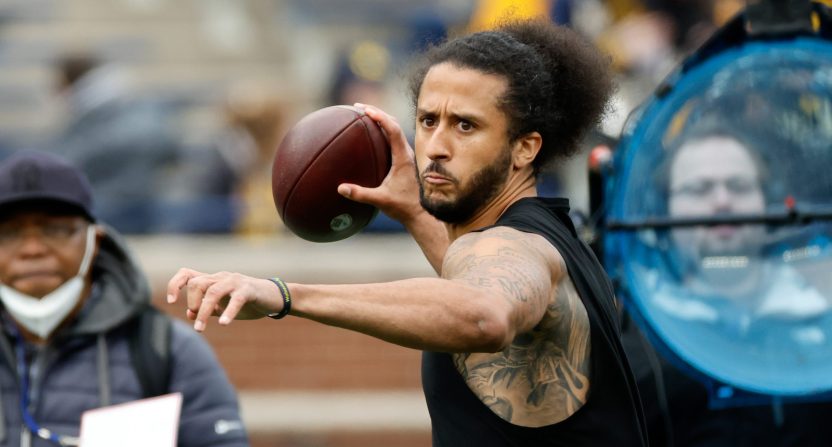 In March, Colin Kaepernick renewed his efforts to return to the NFL, saying in the time since that he feels he can still help an NFL team win games. The Las Vegas Raiders are going to put that to the test.

According to Adam Schefter, the Raiders have scheduled a workout for the social justice activist who hasn’t played in the NFL since 2016.

Colin Kaepernick, who last played football in 2016, the same year he started kneeling during the national anthem to protest racial injustice, is scheduled to work out this week for the Las Vegas Raiders, league sources told ESPN.

According to Ian Rapoport, the workout is happening today, Wednesday.

Last month, Raiders owner Mark Davis said he supported Kaepernick’s return to the NFL and would welcome him to the Raiders organization.

“I believe in Colin Kaepernick,” Davis said at the time. “And he deserves every chance in the world to become a quarterback in the National Football League. I still stand by it. If our coaches and general manager want to bring him in or want him to be the quarterback on this team, I would welcome him with open arms. I think Colin is a very misunderstood human being.”

It looks like Davis is putting his money where his mouth is, though it’s one thing to invite Kaepernick for a workout and another thing to actually sign him.

It was long assumed that if any NFL team was going to take a flyer on Kaepernick it would be the Seattle Seahawks. However, head coach Pete Carroll wouldn’t commit to any further conversations following an initial discussion.

The Raiders likely aren’t looking for Colin to come in and compete for a starting position as Derek Carr just signed a massive contract extension. However, a player of his caliber could make a lot of sense on the depth chart, especially if he still has the talent that helped him lead the San Francisco 49ers to the Super Bowl.

Plenty of reactions to come from around the NFL world, but for now, it looks like Colin Kaepernick is getting his wish.