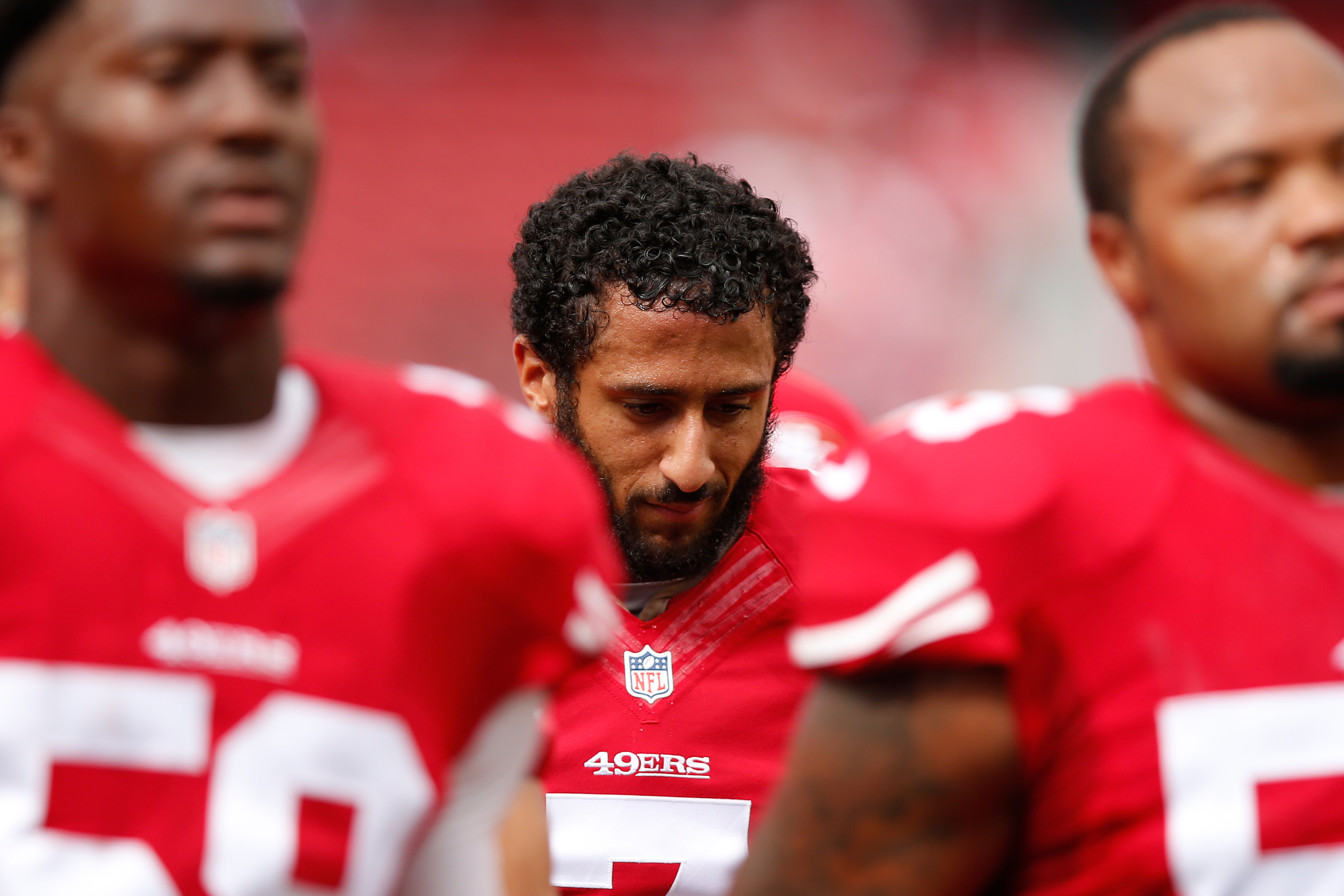 If you’ve gone to any organized sporting event, you’ve likely stood for the national anthem.

It’s omnipresent. Sometimes there are even two of them, if a Canadian team is involved. Normally the only potential controversy is whether or not they’re performed well. (Sometimes yes, very well! Other times, not so much.)

On Friday night, the Packers played in San Francisco. It had all the trappings of a preseason game: less-than-lively crowd, low scoring, Christian Ponder. It was a game that would be played and forgotten almost immediately.

And then Colin Kaepernick didn’t stand for the anthem.

PFT has confirmation from the 49ers it was intentional:

The 49ers have confirmed that Kaepernick did not stand for the anthem, and they have issued the following statement.

“The national anthem is and always will be a special part of the pre-game ceremony,” the team said in a statement issued to PFT. “It is an opportunity to honor our country and reflect on the great liberties we are afforded as its citizens. In respecting such American principles as freedom of religion and freedom of expression, we recognize the right of an individual to choose to participate, or not, in our celebration of the national anthem.”

If you scroll through Kaepernick’s Twitter timeline, you’re presented with a barrage of retweeted stories, focusing on Black Lives Matter, police brutality, and more. It’s a fascinating mix, from someone who obviously sees a lot of wrong in the country, and the world, and wants to use his voice to highlight various issues. A few relevant screenshots, in case they get taken down: 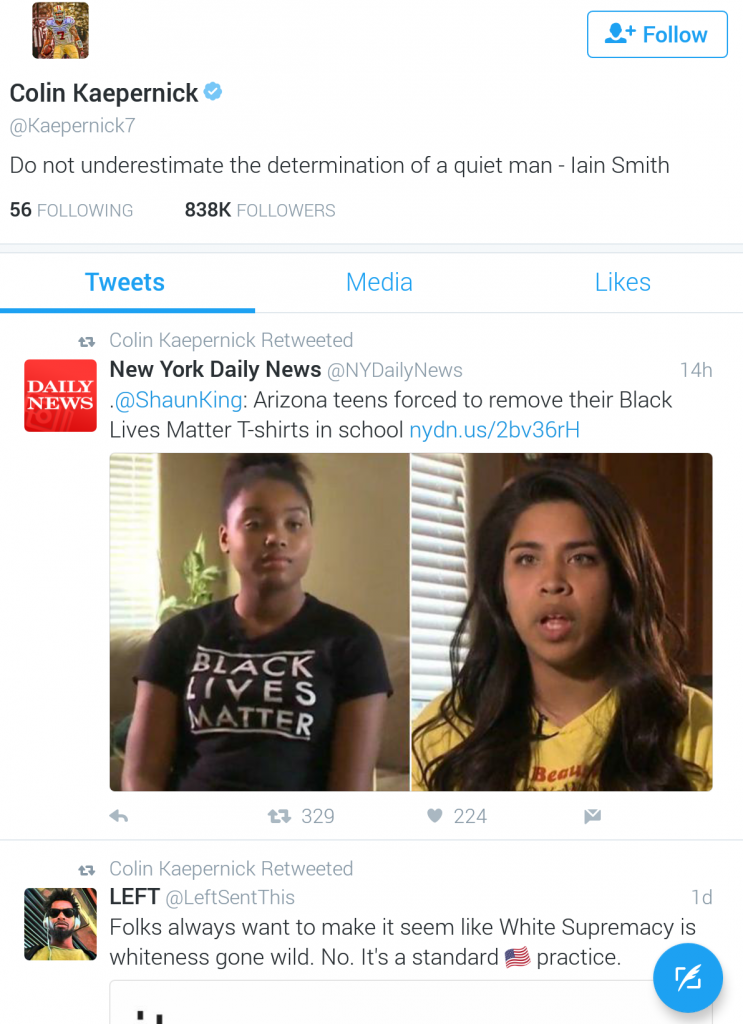 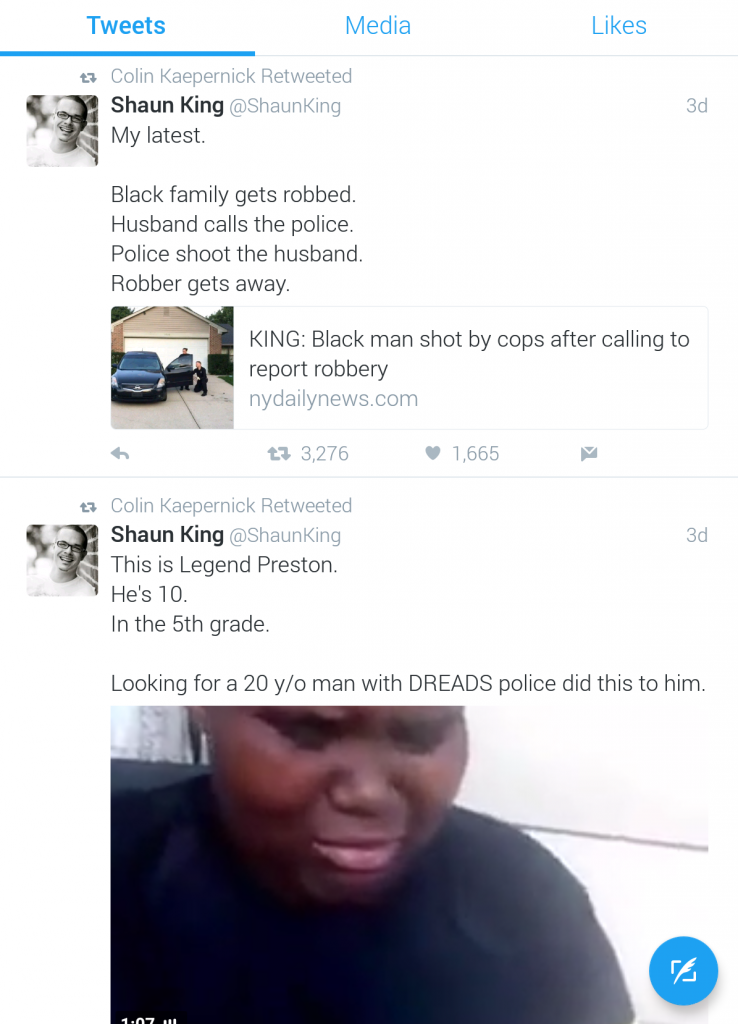 And perhaps most relevant, though that’s pure speculation: 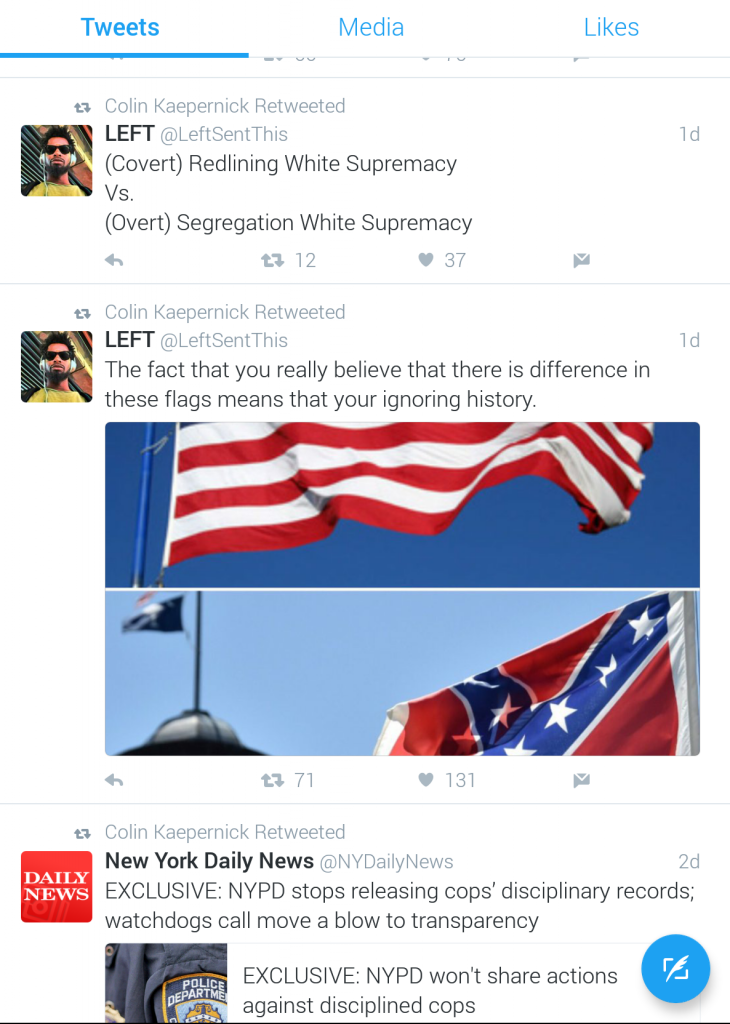 It goes on from there.

Kaepernick is obviously entitled to his opinions. That’s what this country is all about, and his right as a citizen is to express those beliefs and opinions in whatever peaceful form he so chooses, from social media through not standing for the anthem. Athletes are often caught in a catch-22 where they’re criticized by one group if they’re not actively using their voice to call attention to issues, yet once they do speak out they’re hammered by others for doing so.

As for this specific strategy, it’s likely going to offend some people. There’s going to be a certain group of people, some of whom work in sports media, that can’t abide the thought of a player choosing this form of protest.

Remember what Gabby Douglas went through for the crime of not having her hand over her heart during the anthem, which wasn’t even a protest? She had to apologize just to get past it, which is insane.

Dwyane Wade continued his shooting warm-up during the Canadian anthem earlier this year, which was probably ill-advised, and he took a lot of heat for that.

And though it wasn’t our own national anthem, when a Canadian group changed the lyrics to “O, Canada” prior to the MLB All-Star Game to include a horrifically misguided “all lives matter” sentiment, they were rightfully roasted.

The most direct comparison is probably former NBA player Mahmoud Abdul-Raouf, who was actually suspended a game for refusing to stand during the anthem in 1996. The NFL might very well take their own hard line stance with Kaepernick, which would likely not be the worst outcome for him; if his goal is to heighten awareness to his cause or causes, the bigger the controversy gets the better.

At the same time, it’s important to understand that some forms of protest can be upsetting to people. This isn’t quite at the level of flag-burning, but it’s still reasonable to view it as a blatant disrespect of everything the country stands for, as opposed to a more targeted, specific complaint. He might not be doing a service to his own cause by choosing this form of protest, as it very well could get swallowed up in unrelated debate and discussion.

Frankly, though, if he doesn’t want to stand for the anthem, it’s not really that big of a deal. It’s his right, after all. It’s kind of the point of the song.