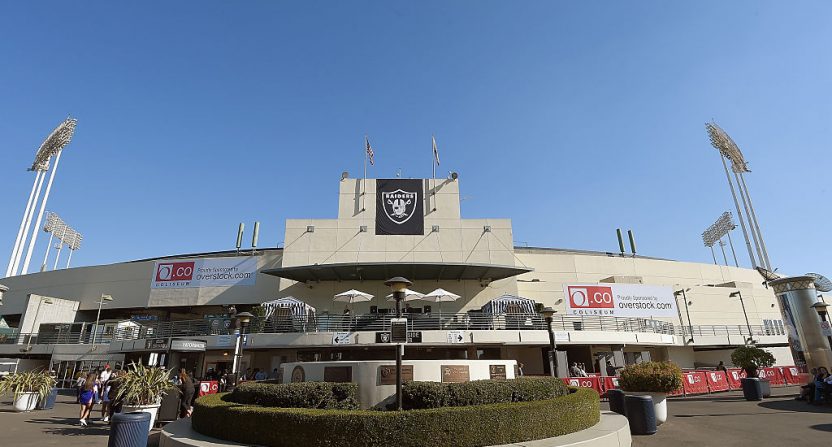 Oakland is set to lose the Raiders to Las Vegas in a few years, but not before the NFL franchise drains the city of a few more million dollars just by playing home games in Oakland. The executive director of the Oakland Alameda County Coliseum Authority says taxpayers would actually be better off if the Raiders skipped town now. Here’s a video outlining the story:

According to the San Francisco Chronicle, the authority’s currently breaking even or losing small amounts on Raiders’ games, and it’s estimated they would lose roughly $2 million per year if attendance drops by 10 to 15 percent (quite possible now the team’s move has been confirmed). That number would only increase if the attendance drops even more. With the Raiders set to pack up and leave the city for a second time in a few years, interest in the team could diminish quickly, which is a real concern for the authority.

“We are better off if they don’t play here, and that’s the bottom line,” OACCA executive director Scott McKibben said.

The city of Oakland and county of Alameda are already going to be on the hook for the Raiders until 2025, when it finishes paying back a bond that helped bring the Raiders back to Oakland from Los Angeles in 1995. The $200 million bond will end up costing a total of $350.4 million thanks to interest, and taxpayers have had to pay much of that thanks to lower-than-expected personal seat license revenues. The city and county have to pay a combined $13 million annually through 2025. By the time that’s paid off, the Raiders could be in their fifth season in Las Vegas.

So why not stop the bleeding while you can now? The problem is the Raiders may have been given approval and are ready to move to Las Vegas, but Las Vegas won’t have a stadium for the team for at least two more years. In announcing the official intent to leave Oakland for Las Vegas, the Raiders announced they will play at least two more seasons in Oakland, and would move to Las Vegas when the proposed stadium is ready for them. There is a possibility that means the Raiders could end up playing three more seasons in Oakland if things do not go quite as planned in Las Vegas.

So now we have a team that has already made up its mind to abandon a city for a second time in franchise history, but will likely be forced to stick around for at least two more seasons and will continue to be a money drain on the city in need of some relief. Considering how much money the NFL generates, it would be refreshing if just once it could come in and help the city it’s leaving to foot the bill, but don’t hold your breath on that ever happening.