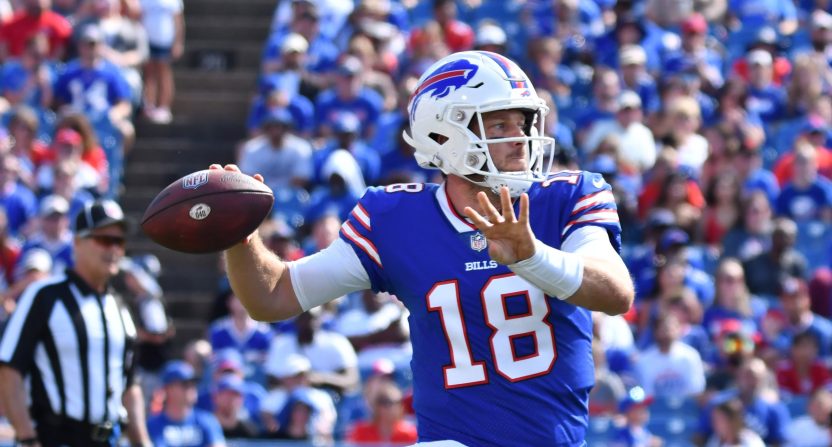 In January of 2018, Nick Foles and Case Keenum opposed each other as opposing quarterbacks in the NFC Championship Game. While that may not seem like that long ago, Saturday’s preseason game between the Indianapolis Colts and Buffalo Bills shows how different both quarterbacks are.

Matt Ryan started the game for the Colts and was under center for four possessions before Foles took over. On Foles’ first drive, he was strip-sacked. Buffalo’s Terrel Bernard scooped the ball up and ran it 69 yards for the score.

.@TerrelBernard_2 goes 69 yards to the house!

It didn’t exactly get better for Foles on the next possession. He threw an interception in his own territory, setting the Bills up for a potential score. Fortunately for Foles and the Colts, Buffalo didn’t score — more on that later. Foles did take advantage of that, though, leading Indianapolis on a scoring drive. So, he finished the half with an interception, a lost fumble and a touchdown pass. While that’s not great by any means, he was miles better than Keenum.

Keenum played the entire first half for the Bills. He opened the game by leading a 10-play drive. Faced with a fourth-and-four from the five yardline, Buffalo opted to go for it. Keenum threw an incomplete pass, resulting in a turnover on downs. It would only get worse. Keenum threw a pick on the first play of the Bills next possession.

Rodney McLeod with the pick ‼️

Keenum then turned the ball over twice in the second quarter. The first was a fumble while the second was an interception, which occured one play after Foles’ interception.

The sloppy performance of the veteran quarterbacks did not go unnoticed.

Feels like it’s been a decade since the 2018 NFC Championship game.

thoroughly enjoying Foles vs. Keenum II and it’s an absolute slop fest with them throwing interceptions on back-to-back plays pic.twitter.com/FhqTQN1Vs8

Keenum vs. Foles is a gong show.

Jaquan Johnson picks off Nick Foles with a healthy return and Case Keenum is picked off before I can even fire off the tweet. cool cool cool.

Josh Allen signed a new contract before the 2021 season while Ryan has yet to play a regular season game with the Colts. But if they’re ever looking for new deals, film from this game should give them ample bargaining power.