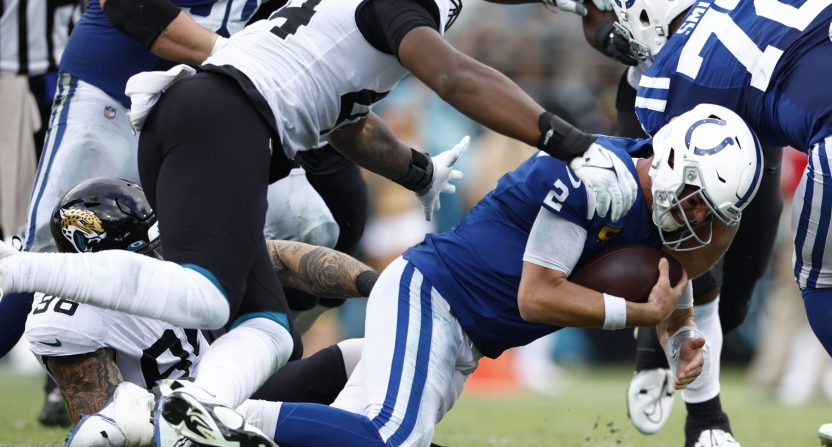 The Indianapolis Colts started their season with a disappointing tie last week against the Houston Texans in a game that they came into as heavy betting favorites. Many thought that was a blip in the radar and were expecting a much better performance this Sunday against the Jacksonville Jaguars.

While Indianapolis came into this game as a favorite, the recent history between the two AFC South rivals certainly was not in the Colts’ favor heading into the game, with the Jaguars winning the last six matchups when facing Indianapolis at home.

Jacksonville also famously beat the Colts in Week 17 last season to keep Indianapolis out of the playoffs, so the Colts had a ton to prove entering Sunday’s game.

To the dismay of Colts fans, Sunday’s game was a disastrous affair for Indianapolis and provided many more questions than answers for a team that many picked to potentially win the AFC South.

Ryan was also extremely turnover prone, throwing three interceptions, mostly due to the massive pass rush from the Jaguars defense.

Jaguars rookie Devin Lloyd capitalizes on the tipped pass and comes away with his first career interception. pic.twitter.com/hmOfVOlV9G

The Colts were down their top-two receivers in Michael Pittman Jr. and rookie Alec Pierce, which hampered them greatly, with the Jaguars turning all of their focus to star running back Jonathan Taylor causing him to struggle to get much going.

Indianapolis was ultimately shut out in the game, with the Jaguars winning in a dominant 24-0 victory. Many people were totally stunned on social media.

I love my Colts but man they make it so hard to root for them at times. We look trash today! 🤦🏾‍♂️

The Colts haven’t won in Jacksonville since 2014

Since 2003 — a span of 361 regular season games — the Colts have only been shutout three times.

All three have come against the Jaguars.

This is a glaring Colts disaster because it invalidates their explanation for last year’s collapse in Jacksonville, and validates every concern from the outside that they arrogantly & defiantly dismissed.

Retweet if you scored as many points as the Indianapolis Colts today (0).

(You can retweet this, @JimIrsay.)

This was an extremely demoralizing loss for every Colts fan (including myself), and there are some very real questions regarding the acquisition of Matt Ryan at this point.

Things don’t get any easier for Indianapolis moving forward, as they face off against the Kansas City Chiefs and star quarterback Patrick Mahomes next weekend.