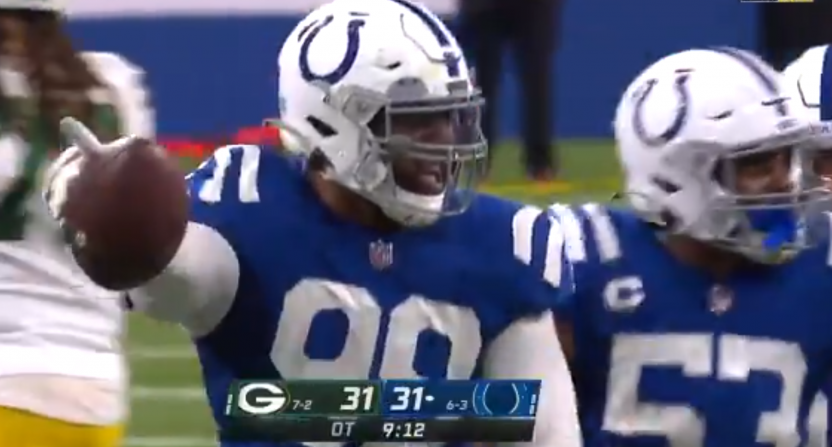 The Colts swept the NFC North thanks to their overtime win against the Packers today, but it could have very easily not gone their way.

Leading by three with the ball late, the Colts picked up a few first downs on a drive that should have been enough to run out the clock, or at the very least leave so little time that even Aaron Rodgers couldn’t lead a comeback drive.

Instead, they were flagged for five offensive holding penalties, punting the ball back to Rodgers with Green Bay even saving one timeout.

That’s almost impossible to do, especially considering Green Bay burned one timeout after the Colts picked up a fourth down conversion under the two-minute warning, and then ran five plays after that. Despite the penalties, the Colts ended up pinning the Packers near their own goal-line, a situation that even Aaron Rodgers would have a hard time remedying, especially against what is probably the league’s best defense.

Or, you know, Rodgers would have them across midfield after one completion.

After that, the Packers actually ended up with a few chances to win the game outright, but the Colts defense prevented a touchdown and forced overtime. Obviously overtime wasn’t the desired outcome considering the blown late lead, but the Colts had trailed for large stretches of the game, including facing a fourteen point deficit at the half. Just getting to OT was a real achievement, and a testament to how good Indy’s defense can be.

If you needed more evidence, though, that defense can still win games, the Colts provided it on the opening overtime drive. After receiving, Aaron Rodgers completed a swing pass to Marquez Valdes-Scantling, and Colts rookie Julian Blackmon forced a fumble recovered by DeForest Buckner.

FUMBLE.@Colts recover with a chance to win in OT. #ForTheShoe

After a few runs to set up a field goal try, Rodrigo Blankenship split the uprights to end the game.

Rodrigo may have sealed it, but the Colts defense was the catalyst. On Green Bay’s final three drives, they forced a turnover on downs (to set up the ill-fated, penalty-strewn drive), kept Green Bay out of the end zone (when a touchdown would have won the game), and forced a turnover to set up an overtime victory.

All of it against Aaron Rodgers.

The Colts have their own issues, especially on offense, but that defense is going to make them competitive against just about anyone. No AFC team is going to want to draw them in the postseason, assuming they get there in a top-heavy conference.