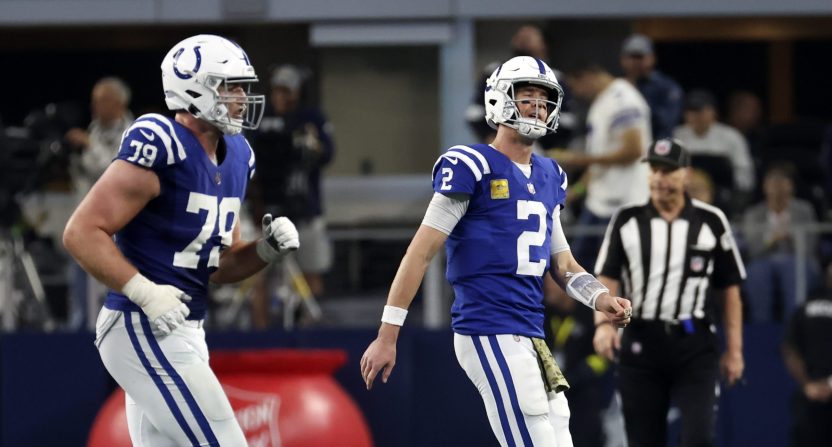 The Indianapolis Colts have had a brutal season with quarterback Matt Ryan under center, and things did not get better for him or Indianapolis on Sunday night against the Dallas Cowboys.

It was an embarrassing performance from Ryan, turning the ball over four times in a brutal 54-19 loss.

Way to make a play, rook! @DaRon_Bland with the I-N-T!

.@DaRon_Bland gets his second INT of the half!

Malik Hooker gets one against his old team. pic.twitter.com/syU6SZ6PVw

Malik Hooker and with scoop-and-score against his old team. And the Cowboys are starting to pull away. pic.twitter.com/X9T3AzTGDO

The good news for Matt Ryan is that the return didn't count. The bad news? Pretty much everything else that happened on Sunday. pic.twitter.com/nrVFYHOzxX

Indianapolis kept it close through three quarters, but Dallas completely ran away with the game in the fourth.

The Cowboys scored 33 points in the 4th quarter, the most they've scored in the fourth quarter of any game in franchise history. The previous high was 25 on Oct. 29, 2006 against the Panthers. Tony Romo’s first start.

To show how truly awful this quarter was for the Colts, Indianapolis scored 33 points total in their last two games.

Much of this blame had to be placed on Matt Ryan for some very untimely turnovers, and the NFL world is absolutely blasting him on social media Sunday night.

I’m a big Cowboys fan but this game has gotten so lopsided so quickly that I feel bad for Colts’ quarterback Matt Ryan. That’s how bad it is.

It is just excruciating to watch Matt Ryan go through this

okay at this point i just feel bad for matt ryan

The world watching the Cowboys vs. Matt Ryan… pic.twitter.com/ajF0jzNHT9

Some are even proposing that Ryan should retire after this disastrous season in Indianapolis.

Matt Ryan should retire on his way off the field tonight.

They need to put Matt Ryan on ice! Been a long night for that man

Matt Ryan is going to retire after this game.

Ryan has clearly been far past his prime this year for the Colts, and the stats back up that notion. The veteran quarterback leads the NFL in both fumbles and interceptions with 13 of each on the year following Sunday’s game.

Matt Ryan has now thrown two more interceptions (13) and has one more lost fumble (13) than any player in the NFL this season.

It’s hard to see exactly where both the Colts and Ryan go from here. They thankfully head into their bye week in Week 14, but face another difficult opponent in the Minnesota Vikings in Week 15.

Colts interim head coach Jeff Saturday ultimately decided to name Ryan the starter after previous head coach Frank Reich decided to bench him for Sam Ehlinger. That decision will certainly be put to the test after this horrific performance.