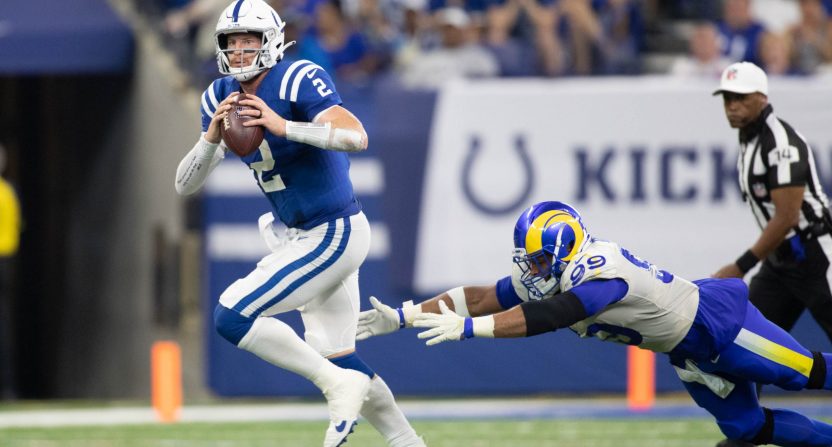 The Indianapolis Colts have had an interesting recent history at quarterback. Since losing the long-term dependability of Peyton Manning, they’ve watched oft-injured Andrew Luck retire, they spent a season with Jacoby Brissett and Brian Hoyer, and they became the landing spot for Philip Rivers before his retirement.

Now, they’re hoping, they’ve found some stability in Carson Wentz. However, Wentz has been dealing with a pair of sprained ankles that made him questionable for this Sunday. And while that might be normal for most NFL teams to deal with, it sounds like Irsay is kinda tired of dealing with it.

In an interview with Fox 59, Irsay was discussing the possibility that Wentz might play against Tennessee and then veered into a bit of a rant about his quarterback staying healthy coupled with an annoyance over his vaccine decision.

“I know he wants to go,” Irsay said. “I know how hard he’s worked. I know he’s respected in the locker room and all those sorts of things. But, you know, he has to stay healthy. You know, no one’s hiding behind the M.O. of the past. That was there, and you know since we, you know, came here and going through the months we’ve been through, there’s been difficulties. And it also makes it difficult if you’re not vaccinated, you know, because it makes it harder to depend on someone if they’re not vaccinated. So they have freedom of choice and we understand that. But, you know, we — we’re hoping he can come back and play well. I think he’ll be a game-time decision.”

Wentz has spoken a bit about his decision not to get vaccinated against COVID-19, saying “I’m weighing every pro and con out there. And it keeps me up at night. There’s a lot of things that go on inside my head, but it’s where we’re at right now.” The cons could be that, if he tests positive at some point, he could be out for at least five days and as much as ten in the middle of a season.

Wentz does have a reputation for being “injury-prone” and whether that’s true or not it’s something that he’s carrying with him at the moment. If he can return from this most recent injury, that’ll be great news for the Colts. But if he misses extended time because of this or other injuries, or misses time after testing positive for COVID, it sounds like Jim Irsay isn’t going to be too sympathetic.

All of which could make the upcoming in-season of Hard Knocks featuring the Colts all the more interesting.