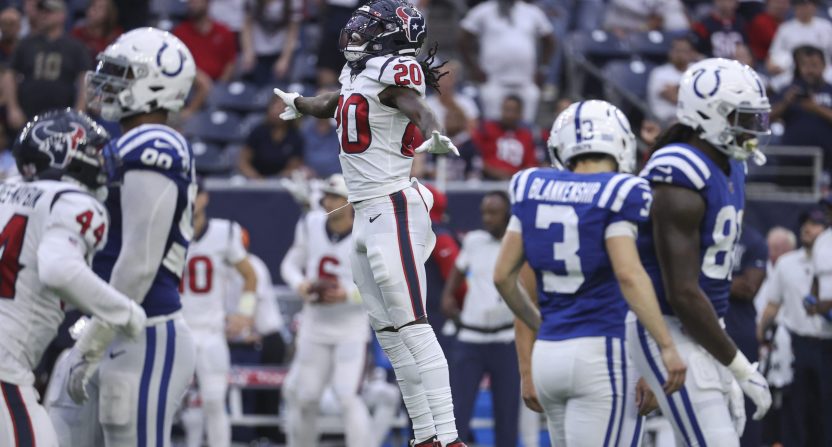 The Houston Texans hosted the Indianapolis Colts on Sunday in a game that became extremely entertaining after three quarters of domination by the Texans, though they wouldn’t end up getting the win. Or the loss.

Houston entered the fourth quarter with a 20-3 lead over Indianapolis, but the Colts managed to come back to tie the game at 20-20 with a touchdown pass from Matt Ryan to star receiver Michael Pittman Jr. with 1:54 minutes remaining in regulation.

After stops by both defenses late in the fourth quarter, the game went to overtime, where there were mistakes from both sides.

The Colts started overtime with the ball in overtime, and Matt Ryan led the Colts down the field, giving Indianapolis kicker Rodrigo Blankenship the opportunity to win the game on a 42-yard attempt. Unfortunately for Colts fans, Blankenship would miss the kick, extending the game with two minutes remaining in overtime.

This gave the Texans a chance to drive down the field and win the game, but Texans head coach Lovie Smith decided to punt the ball on fourth down with 20 seconds remaining in overtime on the Colts’ 49-yard-line. The Colts did not score with 20 seconds left, resulting in a rare Week 1 tie.

Many took to social media to criticize the decision to punt by Smith, considering they had a real chance to win the game if they had converted.

Don’t hate on bearded Lovie Smith for getting into Ted Lasso this off-season and finally understanding the value of a good tie.

40 seconds left. 4th and 3 with the ball on the opposing side of the field and you punt.

You’re telling your team on Week 1 you’re fine with playing for a tie.

That’s how Lovie Smith decided to set the tone for the season.

Boos rain down from NRG stadium and rightfully so.

just resigned to apathy and mediocrity

Considering the Texans only won four games last season, it certainly seems like a pretty gutless move to punt instead of trying for the win. Texans kicker Ka’imi Fairbairn has made a 61-yard field goal before, so the team would have only needed about 10 yards from where they were to be in potential field goal range.

Smith discussed his decision following the game, saying that he “felt that a tie was better than a loss.”

Lovie Smith didn’t want to take a chance at midfield in OT.

“I thought a tie was better than a potential loss.'”

Regardless, both the Colts and Texans will be kicking themselves for these mistakes as both teams start their 2022 season without a victory.