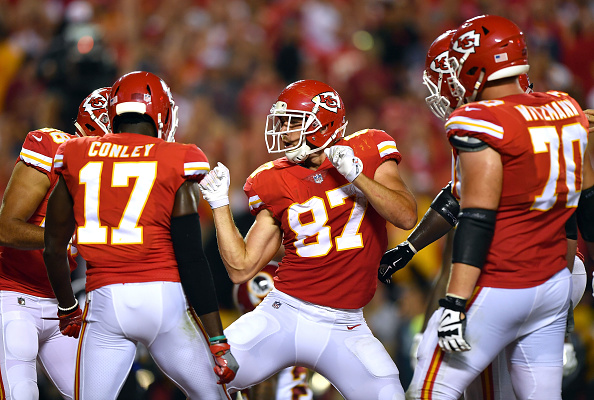 Heading into Week 5 of the 2017 NFL season, the legitimacy of some team’s success around the league is beginning to become more and more valid. We’re finding out that the New York Jets are not actually terrible this year (but the Cleveland Browns still are), the Oakland Raiders road back to the playoffs is not going to be that easy for them, and the Kansas City Chiefs upset of the New England Patriots in Week 1 was no fluke.

So what can be expected from this week’s schedule of games around the NFL?

Patriots notes – New England’s defense is beyond horrid this season. Despite allowing the eighth-least total yards per game just a year ago, the Patriots’ defense has allowed more yards to their opponents than any other NFL team so far in 2017. At their current pace, New England will easily break the league record for most yards allowed in a single season (currently held by the 2012 New Orleans Saints).

Bucs notes – If Tampa Bay is able to get a win this Thursday, it will be their first win at home on a Thursday since 1980. Since 2012, the Bucs are 1-4 during Thursday games, with their only win coming in 2012 on the road against the Minnesota Vikings. A win for Tampa Bay this week will also give them their first 3-1 start since the 2011 season.

Jets notes – Through four weeks, New York has allowed 17 more points to their opponents than they have scored themselves this season. The only time the Jets have made the playoffs with a negative scoring differential was in 1986. In regards to this specific Week 5 matchup with the Browns, New York has won their last four games against Cleveland and has not lost on the road to the Browns since 2006.

Browns notes – This year’s first overall draft selection, defensive end Myles Garrett, is expected to make his regular season debut for Cleveland on Sunday. He has some ground to make up after missing the team’s first four games this year, but 11.5 sacks is all that is needed from Garrett this season to set Cleveland’s all-time record for most sacks by a rookie in a single-season.

Lions notes – It has been 56 games since the last time a player in a Detroit uniform finished their day with at least 100 rushing yards (last was Reggie Bush in 2013). Current Lions running back Ameer Abdullah came close last week to breaking that streak as he ended with 94 yards on the ground against the Minnesota Vikings.

Colts notes – Andrew Luck was seen back on the practice field in Indianapolis this week and that is huge news for the Colts. In games without Luck starting under center since he came into the NFL back in 2012, Indianapolis’ record is 7-7 (including 1-4 in the last five without him).

Titans notes – Tennessee’s only two losses this season have come in games where their offense has failed to gain at least 100 rushing yards (Week 1 and Week 4). But when they actually are able to finish a matchup with at least 100 yards on the ground, the Titans are 11-3 since Week 1 of the 2016 season. Their opponent for Week 5, the Miami Dolphins, have only allowed 100 rushing yards or more to opposing offenses once so far in 2017.

Dolphins notes – Last week’s 20-0 loss to the New Orleans Saints was the first time Miami has been held scoreless in a game since 2013. After scoring 19 points in their first game this season, the Dolphins have scored a grand total of six points in the last two weeks. It likely has a lot to do with their rushing attack, which has yet to find the end zone this year.

Bills notes – For only the third time since 2008, Buffalo has won at least three of their first four games to start a season. The last two instances saw the Bills miss out on the playoffa, a mystical place where they have not ventured to since the 1999 season.

Bengals notes – In last week’s win over the Cleveland Browns, Bengals quarterback Andy Dalton threw for at least four touchdowns for the fourth time in his NFL career. If he does it once again, Dalton will tie the franchise’s record for those types of performances with Carson Palmer. The Bengals are also undefeated when Dalton decides to play at such a high level (go figure).

Chargers notes – With a loss this week, Los Angeles could begin a season 0-5 for the first time since 2003. To realize how long ago that was, the quarterback who started the most games for the Chargers that year was none other than Drew Brees.

Giants notes – On the other sideline, New York is staring at beginning a season 0-5 for the first time since 2013, when Eli Manning threw a mind-boggling 27 interceptions. If the Giants do in fact fall to the Chargers this week, thoughts about finding Manning’s replacement under center this offseason may start to get a little more serious.

Jaguars notes – To understand how bad Jacksonville has been for the last decade, a win on Sunday would only be the second time since 2008 that the Jaguars have won at least three of their first five games in a season. Three wins would also match their second-highest win total for an entire year since 2014.

Steelers notes – There is a reason why Antonio Brown had a temper-tantrum last week and it likely has to do with the fact that he only has one touchdown catch so far this season. At this point last year, the wide receiver already had four. Think Pittsburgh might try a little harder to get him in the end zone this week?

Eagles notes – Luckily, Philadelphia will not have to face talented Arizona running back David Johnson this week. But if they were, the Eagles would likely be up to the task. In their last 20 games, only one running back has rushed for 100 yards or more against Philadelphia. (Matt Jones in Week 6 last year).

Seahawks notes – Despite the success Seattle has achieved in the recent past, they always seem to struggle when playing the Rams on the road. Since 2012, the Seahawks have fallen to Los Angeles in four of their last five meetings away from Seattle. And this was even before the Rams actually had a good offense.

Rams notes – With 142 points scored so far in 2017, Los Angeles is on pace to break the franchise’s all-time record for points in a season which is currently held by the Rams squad from 2000. It’s almost as if someone predicted that Los Angeles could be one of this year’s surprise teams.

Ravens notes – After beginning the year 2-0, Baltimore has now come back down to earth with the rest of the mediocre teams around the NFL this season. Their turnover differential during the past two weeks is really what has lead to them suffering two losses in a row. During their first two games, the Ravens had 10 takeaways and only three giveaways. But in the last two weeks, they have given the ball up six times while only forcing one turnover on defense.

Raiders notes – EJ Manuel is expected to start at quarterback this week for Oakland in place of the injured Derek Carr. The best idea for the Raiders would be to not rely on Manuel to carry the team and lead them to a victory, as the quarterback has not won a start under center since Week 2 of the 2014 season.

Packers notes – If it seems a little puzzling that Green Bay is off to a 3-1 start once again this year, it’s probably because they have yet to beat a team with a winning record. In their only matchup against a team whose record was over .500 (Falcons in Week 2), they lost. However, with games against the Cowboys, Vikings, and Saints over the next few weeks, it could be a while until the Packers actually do face a team with a winning record once again this season.

Cowboys notes – This Sunday, Dallas will be attempting to get their first win at home over the Packers since 2007. That game also happened to be the very first in which current Green Bay quarterback Aaron Rodgers threw his first career touchdown. Since then, he has only thrown 306 more (including seven against the Cowboys).

Chiefs notes – Kansas City is this year’s final undefeated team and they are hoping that their fortune will turn out different than that of the last 14 who came before them. Since 2006, the NFL’s final undefeated team in a season has failed to make the playoffs only twice, failed to make it all the way to the Super Bowl 10 times, and been the last team standing with the Lombardi trophy only once (Colts in 2006).

Texans notes – To put into perspective of how well rookie quarterback Deshaun Watson has been playing for Houston this season, just know that after three starts this year, he only needs eight more touchdown passes to pass the entire team’s total from a year ago (15).

Vikings notes – It does not matter how good of a season Minnesota is having when it comes time for their annual trip to Chicago, they always seem to struggle when playing the Bears on the road. Since 2001, the Vikings are just 2-14 when they play a game in the Windy City.

Bears notes – After four weeks of Mike Glennon playing catch with the other team, Chicago has decided to go with rookie Mitchell Trubisky at quarterback this Monday against Minnesota. Trubisky will be the first rookie signal caller to start a game for the Bears since Kyle Orton in 2006.