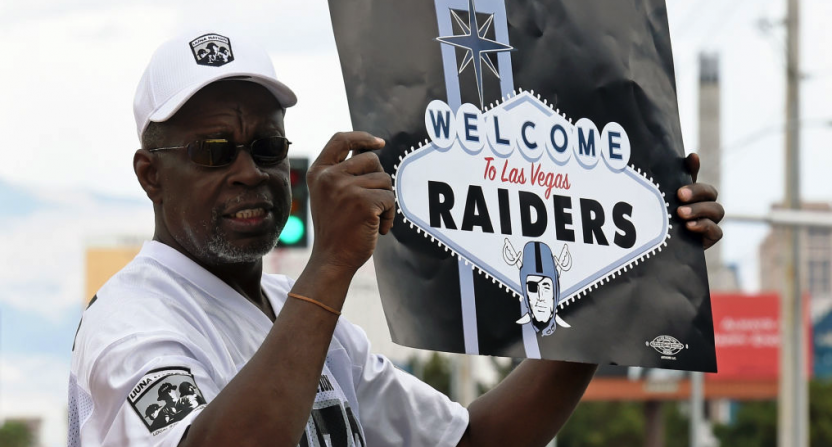 The Oakland Raiders are moving to Las Vegas, and there are dozens of reasons why that’s a big story.

Leading the way is the fact that the NFL has abandoned a long-serving market for the third time in a 15-month span. What does that say about the league, its teams and its owners? How will famously passionate and loyal Raiders fans react, especially with the team spending at least the next two years as lame ducks in the Bay Area? And how will the small but expanding city of Las Vegas embrace its new franchise?

Legitimate stories, all of ’em.

But you know what shouldn’t be a story? The idea that a presence in Las Vegas could have a significant effect on players, coaches, officials and the league in general when it comes to the temptations that have made that city famous.

The majority of those speculating that a team in Las Vegas could cause NFL employees to succumb to the pressures related to gambling and/or partying are flip-phone-carrying Baby Boomers who haven’t been to Vegas since ’78 and think “Bovada” is a type of fish.

Those who ignore the fact Miami and New York are certainly nearly as tempting when it comes to nightlife and ignore the fact the Rams, Steelers, Ravens, Lions, Browns and Saints all already play within a mile of at least one casino are also the sort of folks who probably don’t realize that if they’re tempted to gamble, millennial NFL players are about a trillion times more likely to do so by creating an online account with a fake name in order to place bets using an iPhone.

They also might not realize Las Vegas is a real city with real people, real suburbs, real businesses. According to Forbes, between 2000 and 2010, Vegas was “the nation’s fastest-growing major metropolitan area per capita.”

This might come as a shock to those who have formulated their opinion of Las Vegas based only on caricatures stemming from The Hangover, Ocean’s Eleven, Vegas Vacation, Casino, Swingers, Rain Man, Fear and Loathing in Las Vegas, Leaving Las Vegas and Showgirls, but Las Vegas has schools and kids and stuff. It has shitty strip malls and stressed-out soccer moms driving Dodge Grand Caravans, just like your hometown!

Yes, it has a world-famous party strip. So do Miami and New Orleans. Yes, it has gambling. So does every other locale on the planet that has internet access. The sports betting industry hasn’t relied on brick and mortar since the turn of the century. The illegal online market generates more than $100 billion annually.

And yeah, Vegas is America’s party capital. But every NFL team has a Saturday curfew. Players on road teams won’t have a chance to hit the strip. Sure, single 20-something-year-old Raiders players might be fired up about residing in Las Vegas, but they have curfews too and we’re talking about less than a dozen weekends per year. And again, let’s not pretend dudes playing for the Giants, Jets, Dolphins, Rams and Saints don’t have the same ability to party till the sun comes up seven nights a week.

So yeah, this is a story angle manufactured by those who either don’t know anything about Las Vegas/gambling/party scenes or have run out of fresh story angles.

Give it a rest, Mike Florio.

If you told me this post was written in 1995 by somebody who had never been to Las Vegas, I'd understand. https://t.co/XTOEQy9sB4