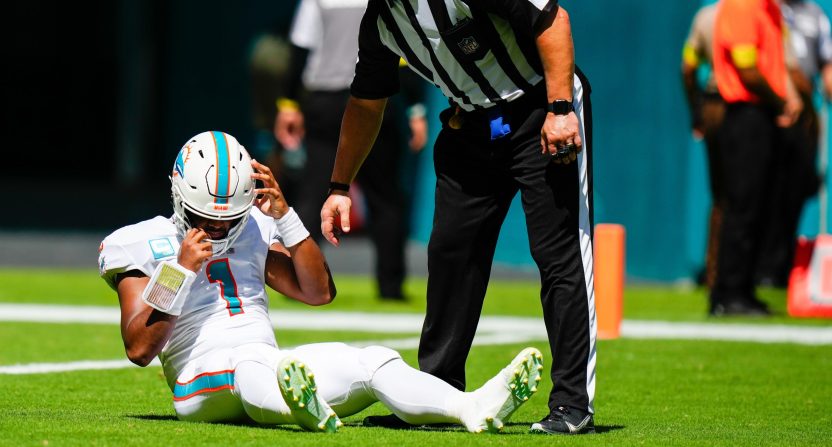 The neuropathologist who was the first to discover CTE brain damage in football players says that Tua Tagovailoa should retire immediately.

Bennet Omalu, who was portrayed by Will Smith in the 2015 film Concussion, told TMZ Sports he believes Tagovailoa has “suffered severe, long-term permanent brain damage.”

After watching the Miami Dolphins quarterback suffer head trauma last Thursday against the Cincinnati Bengals, Omalu has a message for Tagovailoa.

Tagovailoa’s injury came just four days after he suffered a blow to the head in Week 3 action, and his situation sparked a storm of criticism toward the NFL and the Dolphins. The NFLPA launched an investigation into how the NFL handles its concussion policy, which has already led to proposed changes.

The league and NFLPA were set to interview the 24-year-old QB Tuesday.

Tagovailoa has been ruled out of next week’s game but is regarded as week-to-week. Omalu thinks he would be making a big mistake if he ever plays again.

“He should stop,” Omalu said. “Sometimes money is not more valuable than human life. $20 billion is not worth more than your brain.

“Tua, my brother. I love you. I love you as much as I love my son. Stop playing. Stop. Hang your helmet and gallantly walk away.”

Omalu, 54, rose to fame in the early 2000s when he discovered that football players were susceptible to chronic traumatic encephalopathy, a degenerative brain condition previously associated with boxing.