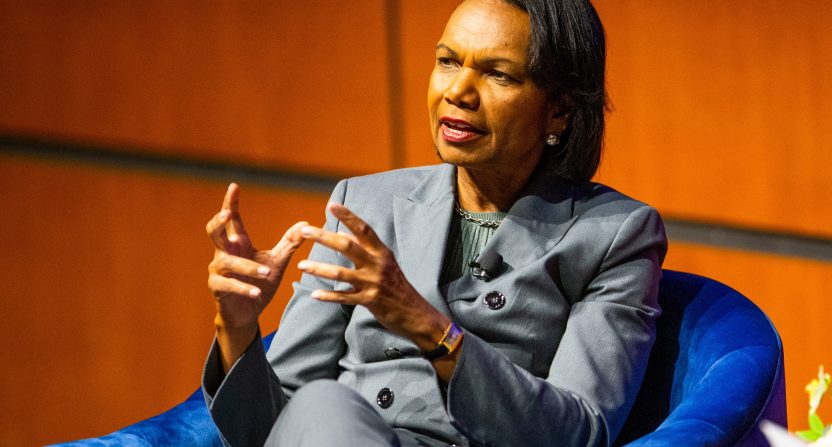 Last month saw the news that the Denver Broncos had been purchased by Rob Walton, the heir to Walmart’s fortune, . Walton bought the team for a whopping $4.65 billion, purchasing it along with his daughter Carrie Walton Penner and son-in-law Greg Penner.

This was major news within not only the NFL world but the sports world. This marked the biggest purchase of an American sports franchise to date.

It was previously unannounced who all would be part of the Walton-Penner ownership group. But the organization announced a huge name as a partner on Monday.

The Broncos have announced that former Secretary of State Condoleezza Rice will be part of their ownership group. Rob Walton released a statement on the ownership group’s behalf, stating their excitement to be adding Rice to their group.

“We’re pleased to welcome former Secretary of State Condoleezza Rice to our ownership group. A highly respected public servant, accomplished academic and corporate leader, Secretary Rice is well known as a passionate and knowledgeable football fan who has worked to make the sport stronger and better. She is the daughter of a football coach and served on the inaugural College Football Playoff Committee. She moved to Denver with her family when she was 12 years old and went on to attend the University of Denver for both college and graduate school. Her unique experience and extraordinary judgment will be a great benefit to our group and the Broncos organization.”

The Walton-Penner Family Ownership Group is pleased to welcome former Secretary of State @CondoleezzaRice to its ownership group.

Rice’s interest in involvement in the NFL dates back to rumors of her potentially being a candidate for the Cleveland Browns head coaching vacancy in 2018. She has also expressed interest in becoming the commissioner of the NFL at some point.

Condoleezza Rice will be one of the guests of tonight’s ESPN ManningCast of Bucs vs Giants Monday Night Football game. Former U.S. Secretary of State has said she’d like to be NFL Commissioner one day.

While neither of these things has come to fruition, Rice will now have at least some part of ownership in the Broncos organization. And many around the NFL world are intrigued as to how much involvement she will have.

Rice has prior connection to Broncos. She was engaged to Broncos Ring of Fame WR/returner Rick Upchurch in the 1970's.

Wow. Former Secretary of State Condoleezza Rice, who once spoke publicly of her aspiration to become NFL commissioner, is joining the new ownership team of the Denver Broncos. https://t.co/hoIud1k3gG

It remains to be seen if Rice will have any type of day-to-day role within the Broncos organization. That will definitely be worth monitoring moving forward.