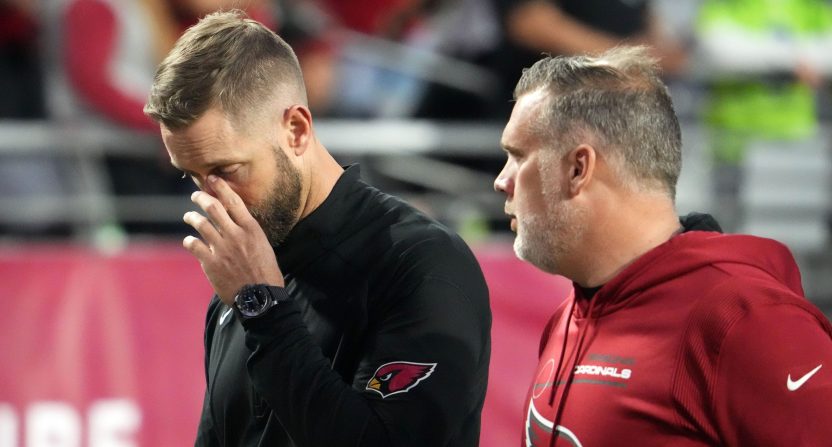 The Arizona Cardinals ended their season in extremely disappointing fashion. Following a 10-2 start in which they seemed poised to be the top seed in the NFC, the Cards lost five of their last six games, squeezed into the playoffs for a road game against the Rams, and promptly got beat while looking fairly inept on offense.

It was a nightmare finish to what seemed like a storybook season for Arizona and a lot of the blame is falling directly on head coach Kliff Kingbury. Despite the fact that the Cardinals have improved every year under Kingsbury, there is a sense that his teams can never put it together when it matters most despite having some very big weapons on offense and defense. And you might assume that if he can’t win with Kyler Murray, JJ Watt, DeAndre Hopkins, and Chandler Jones, what is it going to take?

So when Kyle Odegard, who had previously worked as an internal reporter for the Cardinals for eight years, said that a meeting between Kingsbury, Cardinals owner Michael Bidwill, and GM Steve Keim was “tense” and volatile, it sounded legit.

However, NFL insider Ian Rapoport soon quote-tweeted Kyle’s report with a report of his own, saying that “there has been no meeting.”

That would certainly refute the report, but it also raises another question. Rapoport didn’t say that a meeting happened but there were no fireworks, he said that there hasn’t even been a meeting between the owner, GM, and head coach following the brutal end of the season. That’s strange and implies that there might be a reason no such meeting has taken place.

Then there’s Kent Somers of the Arizona Republic, who tweeted to say that his source isn’t aware of any meetings either but did confirm that owner Michael Bidwill is “very, very upset” with how the season ended, which would confirm that even if this meeting didn’t happen, things are not good behind the scenes.

A source didn’t hear of this meeting,” wrote Somers. “But did confirm owner Michael Bidwill is “very, very upset” with how the regular season ended and his team’s performance in the playoffs.”

And I’m guessing Michael Bidwill doesn’t mind outside folks knowing he’s pissed. He should be.

So what’s the truth? Hard to know for sure, though it does seem like the people working the NFL and Cardinals beat would know best. Either way, it’s hard to imagine that Kingbury won’t be hearing about it from ownership and that changes could be coming, even if he doesn’t get fired himself. Given how stacked the Cardinals roster is, Kingsbury might be in the rare position of coaching for his job next season even though he took a team to the playoffs this year.